A Relay Race is the image at 21° Capricorn, a sign we seem to be speeding through. Fittingly this symbol is ruled by quicksilver Gemini in a twelve-fold sequence and it hinges on the value of competition in developing group consciousness. This isn’t a competition between individuals but teams of individuals, and Gemini, via the third astrological house, governs such teamwork and boon companions working toward a common goal. Remember the original Twins of the Zodiac are half-brother (quadruplets rather than) twins who were inseparable in battle. Life is something of a relay race in that each generation passes the baton to the next, typically within small family groups or communities, which again fall under third-house rule. We say how major achievements result from the total sum of our collective striving—group performance is what is on display here. The individuals, as in the choir of the previous image, are working in concert, but here, in a series or solo exhibitions which will be tallied collectively. Still the total is greater than the sum of the team’s parts—and only as strong as its weakest link. 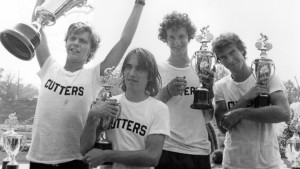 When we encounter this degree point in chart readings we see the emphasis on the value of group cooperation and the need for give-and-take. Interchange is the theme of this symbol, just as it is the theme of the sign of Gemini, which is preceded by Aries (active) and Taurus (passive) energies, combining the two into this dual dynamic. We speak about the dexterity, the flexibility, the versatility of Gemini; and here applied to a Capricorn symbol, it is given lofty significance, elevated from the street level of interchange in the form of deal-making or bargaining or marketeering, which is the usual Gemini estate, to something more noble. Cue Chariots of Fire or Breaking Away, both of which films depict racing for a spiritual win of sorts. I think that’s what’s at stake here, for again, the individual ego is sacrificed to the team, or whole, here, in an expression of soulful solidarity. And, like the choir coming together to lift their voices (Taurus) in tuneful expression, here the collective body must use their skill, their nerves, their speed, their alacrity and their fleetness a foot, all of which are a nod to the Mercury ruled sign of the Gemini. Makes you kind of wish you had a spiritual body of close friends, a team, with whom you can work, move, act, function, perform, live, as a team.