A Rabbit Metamorphoses Into A Nature Spirit is the symbol at 23° Scorpio and, without having read anything about it, I feel I love it. I have a thing for rabbits. I think it’s related to being a Libra. I often think Librans look like rabbits. I think I do. I love Bugs Bunny. I know, who doesn’t; but I really do. I love his mix of macho and fey. Why hasn’t Warner Brothers done something great with the Bugs brand. I’m sure they will. Everything happens eventually. Except a sequel to Bridesmaids, which should be called Bridesmaids Revisited. But Kristin Wiig won’t make the movie. She has too much class, apparently. I don’t know her. She doesn’t look like a rabbit. She’s a Leo. She looks like a starving lioness. But I digress.

What about this image? Well on the surface it is about the raising of animal drives to a higher level; but the real deal here is the concept of Transubstantiation, which is specifically that process by which the wafer and wine become the body and blood of Christ, not just symbols thereof. So the rabbit, which we know fucks like one, represents the sexual and procreative urge, another basely animal-human one akin to the agression of yesterday with those innocent sitting ducks as a target of murderous intent. But we can transubstantiate these elements of human self into something higher, represented by the nature spirit. We can literally become another being. The nature spirit guides living things, like the rabbit. The rabbit’s libidinous nature might be determined by the nature spirit who was once that rabbit. In our circles, in our circles.

Given the Scorpio assignation of this oracle, I can’t not think of this as a metaphor for death, which, according to our astrology, doesn’t exist—there is only regeneration as nothing has a beginning or an end, all things being cyclical. The Zodiac is a wheel after all. I have mused, since childhood, on the notion that this life is one big cocoon experience. That death is truly an illusion. It is just us leaving the cocoon. The so-called grizzling process of aging being the outward signs of our readying, as a chrysalis, to shed our skin or leave the cocoon; and when we do we are made of stuff so fine and etheric that our former human fellows can’t perceive us. Can the caterpillar conceive of or witness the butterfly. I don’t think so, gr. So, yes, we associate words like regeneration and transformation with the sign of Scorpio, but what about this transubstantiation jazz. I like it. Now if you’ll excuse me, I’m going to try to YouTube Bugs Bunny as a manicurist. “I meet so many monsters….soak, please.” 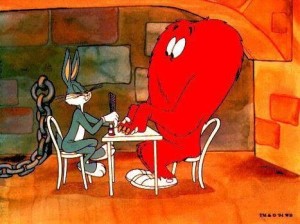