A Powerful Statesman Over-Comes A State Of Political Hysteria is the Sabian Symbol at 13° Virgo, an image that is ruled by Libra in a twelve-fold sequence. Here the focus is on a collective need for order and structural interdepence embodying in the form of a personage that answers this need. How very Libra the call for order is; so, too, is the statesman, someone who rises, elected, from the democratic body, in contrast to the sun-king of two days before and the fecundating husband of yesterday, impregnating mother nature. Here today, the purpose of a cyclical nature clashes with the remains of the deconstructed past. Order isn’t automatic, although its need is pressing. 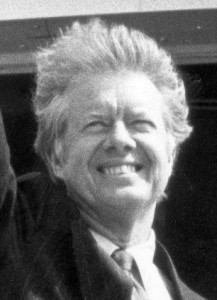 I think of Jimmy Carter, a Libra, and one of the best presidents our nation has ever known. Like Gandhi and Walesa (also Libras) he called for solidarity, but people couldn’t cope with the ruins they were living in—they hadn’t made peace with a deconstructed past and thus couldn’t embrace a new order of solidarity that didn’t allow them to remain spoiled brats. Even though he inherited said ruins from Nixon and Ford. Ford who pardoned Nixon apparently also pardoned my godfather uncle who may well have been a godfather in another sense. Who knows. I digress. Obama has inherited the ruins of Bush (and Cheney), you know those war criminals who are the true traitors in a system who condemns a hero such as Edward Snowden as one. Another digression. The point is, America didn’t want to conserve energy and pull together and adhere to some social order that could have weathered the chaos created by an evil, greedy past. In time, of course, the “weakling” Jimmy Carter is now revered as one of the strongest, kindest men in American history, and he is now facing his own mortality with the same grace and dignity as he did the troubles he encountered in his presidency, during which time, one might add, he brokered a great peace in the Middle East. I love Jimmy Carter. He has what Stella and I call “good babysitter syndrome”.

What we’re really seeing via this image, and the passage of time, is that eventually that character who inherits chaos and is typically scapegoated for it, like Carter and Obama—they ultimately emerge as the “divine father” of the society he helped structure. The character of the true statesman, something we all might emulate in our own life and dealings, is one of great charisma—a word akin to charity and the opposite of miasma. Charisma is defined, in basic terms as a charm (another Libran word) that inspires devotion from others. It is also “a divinely conferred power or talent”. Let us be, like the statesman in this oracle, like our dear Jimmy Carter, like all the Jimmy Carters and Gandhis in the world, divinely suffused with powers and talents for good. And lets let the real evildoers fall into the miasma of their own making.