Give Me A B

Cancer 6° is ruled by Pisces in a twelve-fold sequence. The oracle is Game Birds Feathering Their Nests and it’s about an instinctual dedication of self to new forms of life. Pisces is the womb-tomb the opposite facing fish pointing to that proverbial two-way street, life-death, creation-destruction, cyclical not linear, like all things under cosmic rule. I am not a parent in the literal sense nor do I have any desire to be. For me, any new life form would be a reincarnation of self, not in the sense of past and future lives (although I have recently reaffirmed my belief in this) but in terms of reinvention in this lifetime. I have emerged from recent difficulties and mishaps with a new vision of self which was almost exactly like my prior vision only with more flair and no half measures. As well, though I believed I had mastered the notion that “what other people think about you is none of your business” recent events have hit home that thought-form to such an extent that it seems to live in my bones. To be great is to be misunderstood. And I suppose there is nothing like a brush with death to make one realize what’s important in life and what isn’t. I am thus dedicated to bringing up the baby who resides inside of me. A new wave of life is cresting within and I know that I shall give new life to others by giving to myself. Yesterday was such a miraculous day with the Supreme Court deciding in favor of marriage equality—a miracle because of those who dedicated their lives and perhaps didn’t live to see this happening. But it starts with the personal and then moves to the universal. What is worth giving life to, of benefit to the many, starts with doing right by oneself. We joke about how the LGBTQ community might still continue to add letters to that marquee, whilst the B will still remain silent. I’ve been a fairly loud voice for the B over the years or have tried to be, though there isn’t as much support out there from either the gay or straight communities. In terms of gender equality, we more readily understand fluidity and that we can’t strictly always strictly label people, male or female; likewise, in regard to sexuality, not all of us fall into strictly gay or straight camps. And gender does come into play here too because, we as a society don’t seem to much care if a woman is bisexual, in fact it seems to add to her mystique; yet bisexual men have always gotten a terrible rap when in fact the world is probably, ironically, overpopluted with them…us.

I believe, and say so in our writing and to the press, that transgenderism is part and parcel of our present evolution and I believe it’s the same with bi or pansexuality. The notion that people can’t be attracted to both sexes has always seemed ridiculous to me. Of course it’s my experience so it would. It’s a sad paradox that the most ardent proponents of gay rights often seem to be the biggest detractors of bisexuality. In a movement toward living label free, why are folks so hung up on this? Because it’s not their experience? Well, being gay wasn’t straight society’s experience these past centuries which added up to persecution of gay people. If you’re gay and “don’t believe in bisexuality” then you’re just as much an oppressor as any straight who found your gayness to be a lie or a disease. You should mount a campaign, then, to have the B removed from the marquee. So long as you don’t, however, you must commit to acknowledging the existence of B people. But bisexuals and pansexuals are partly to blame for where they find themselves. Because they are attracted to both sexes it has been less a struggle for them to polarize in a straight direction and to, in a sense, “pass”. It wasn’t wholly displeasurable nor did it seem utter self-denial to do so, but of course it is. So long as bisexuals and pansexuals are casual about their existence, one can’t fully expect the world to take them seriously. Living in the gray area of the spectrum, in half-light, is a half-life.

The womb-tomb is where evolution happens. If we are evolving as a species then evolution happens on the whole with each subsequent birth of a generation. I think the Pisces fish, synonomous with the Jesus fish, points to the notion of a “new wo/man”, an enlightened and evolved being, a superhuman powered by love and transcendence and compassion as we see embodied in a Christ figure. I also think Jesus was a bisexual hippy who loved Mary Magdalene and “the beloved disciple” John the Evangelist. It was a total whatever situation and I think we can’t divorce the fluidity (opposite facing fish, floating in and floating out) of gender and sexuality from the characterization of an enlightened, evolved being. I don’t think you get to be Jesus if you’re a polarized personality. I understand how radicalized the gay community has had to be in order to fight the oppression of what has been a radically straight and homophobic society. Going to extremes has been an absolute necessity. Still, the original goal is acceptance and compassion, sweeping and ubiquitous. And it just might be time for the silent B people to come out of their cupboards and perhaps even take the lead, along with transgender individuals, in helping the larger LGBTQetc. crowd get beyond any existing dualities. 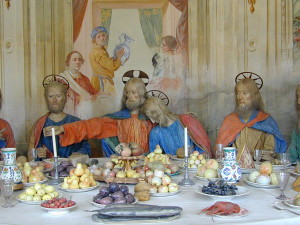 Personally, this past year, I have had to gravitate away from certain people who were playing the roles of good friends in my life, specifically gay friends, around whom I felt invisible because they sought to ignore and indeed deny my identification as a bisexual. I came out to my parents when I was seventeen years old and despite the fact that my father specifically could be seriously closed-minded and something of a bigot, they totally accepted and understood that this was central to my essential nature. The same holds true in my thirty-plus love relationship with my wife. I can’t divorce any part of myself from the reality of my sexual identification. I’m no spring chicken. So being open an honest about my sexuality to my largely straight male friends all through college and beyond wasn’t the norm for them, but I was never treated like the odd man out or made to feel less than. At times, even, I felt my straight friends applauded me and were intrigued and, who knows, maybe I made it more comfortable for them to accept any gray spectral areas in themselves. Really the only shade came from inside the house of the LGBT(Q) community. And, during the eighties and nineties up to the present, it wasn’t the best time to be perceived as someone who lived anywhere along the spectrum. Extreme times do call for extreme measures, and it’s hard for a person to get their brain around being extremely gray. It wasn’t the bisexual or pansexual who broke through that; it was the transgender individual who did so. But some of us have been living for a long time beyond the binary of sexual identity, mostly invisibly—again due to fault only of our own—while the transgender community has moved past the binary as relates to gender.

I do see evidence of sexual evolution. I believe that a great number of young people don’t feel the need to identify as gay or straight or even bi or pan. They just are. And if they find themselves attracted to members of the opposite or same sex at the same time or at different epocs in their young lives they seem not to judge themselves and therefore invite judgment let alone censure. These are my people. These are people. I like to think that ten or fifteen years ago when I would declare myself bisexual on stage in performance, for instance, that I might have helped them feel that much more at ease. When, in my late teens and twenties, I did the unthinkable and urged (forced?) my straight male friends to hug me hello and goodbye and kissed them on the cheeks that I had something to do with the fact that straight men hug it out all the time now. I think that maybe I have already in my personal history dedicated myself, in some small way, to creating and nurturing new life. I have endured more than my fair share of shade and hate and disdain and sneers and side glances and whispers and all the rest by the other letters in the marquee and it’s only made me stand taller (as much as I can at my height) and look sharper and love more and find increased compassion. I have often wanted to say: you are doing to me exactly what you claim heteroworld has done to you all your life: denying my existence and hating, hating, hating. I can take it but it’s not okay. Just as it’s not okay, I don’t believe, to be a closeted bi or pan person. Especially when sexism comes into it. When it’s Megan Fox or Olivia Wilde it’s okay; but when it’s Billie Joe Armstrong or Michael Chabon or Marlon Brando or Pete Shelley or Leonard Bernstein or Cary Grant or Josh Hutcherson or Pete Townsend it’s not? In an ironic turn of phrase: Bitch, please.

Sociologically, today’s oracle speaks to pioneering efforts dedicated to the building of a new culture. It is all about rebirth. And I dare say it’s about rebranding. These aren’t mere birds, remember, they are game birds; and I will stretch for the intended puns here in that I have a new game face on now, seeing that my own rebirth shall be characterized by a winning resolve; and I’m also game—willing, eager, thrilled—to help to create a brave new world wherein relics of the past with their dinosaur ideologies and twentieth century snark can all gather together and read each other, sharpening their teeth that this new world, not dog-eat-dog, no longer requires. There are no theme weeks or dark rooms in my paradisal vision. Just people doing stuff, adhering to the golden rule while doing it. I am suffused with love for all people. Now let’s feed the hungry, lift the poor, proliferate the arts, depopulate the prisons and educate everyone. That is the new-life dream is it not?