Just one week ago Stella and I were preparing to perform our show at Joe’s Pub on the Solstice which was a tribute to the Moon and we referenced A Midsummer Night’s Dream and even performed a bit of it for a sketch with Patrick Johnson and Phoebe Legere (Moon Light) playing Puck and Fairy who meet in a wood near Athens. The pair of celestial clowns Shakespeare sends in is followed by another, Titania and Oberon, monarchs of the nature spirit realm. “Ill met by moonlight proud Titania,” is the fairy king’s first line to his estranged queen. The intersecting plots of fairies and humans speak to the vapor thin veil between the worlds, perhaps particularly, at this time of the year. In Summer, beginning with the sign of Cancer on a moonlit summer night, there is no better time to imagine the world alive with nature spirits; it’s actually hard to imagine it isn’t. And, as last week was was a hazy transition from shock to post trauma, performing seems but a dream. Then again, there are those who suggest that the whole of life is but one too.

I do believe in fairies. It’s one of the things I can’t not do. Then again I’m wont to see the animate in everything, inferring spirit and personality in a chair or china cup. The notion that the Sabian Symbol for the day marks a fresh start, through the Zodiac, in a twelve-fold sequence is fitting. Aries presides over today’s oracle at 7° Cancer, Two Nature Spirits Dancing Under Moonlight, “the play of invisible forces in all manifestations of life.” And though Aries and the first astrological house rule the body, it is more accurate to say that the sign rules physical embodiment, for it is the sole cardinal-fire sign of the Zodiac, fire signifying spirit and cardinal meaning premier, primal and initiatory. Thus Aries is akin to a spark of life, the animating force. Aries people personify that sparky energy. Cancer people feel it most accutely. And so their magical superpower lies in their gut intincts and intuition. And their ruler Moon is the amplifyer of all things mystic, astral and etheric. 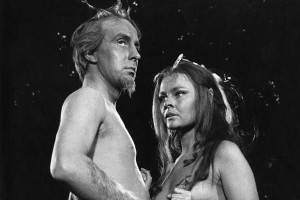 Are there occult forces at work behind all vital processes? Who’s to say. I have felt quite strongly at times that there are; and other times the notion eludes me. But the fairy world is an elusive one; their stories are often thematically hinged on that concept. You may slip into fairy land quite accidentally, but you might not get back to Wonderland or Narnia or Oz or Brigadoon or wherever Darby O’Gill saw those little people. Now let’s look at all of this as a metaphor for Creative Imagination. The trick and the goal is always to marry our dreams and our ideals with everyday reality, to live the dream: To understand that what you wish for is animated by the spark of the wish itself and what fans it into fire is belief, in yourself and in the dream. One positive result of having gone down a bit of a rabbit hole this past week is that I emerged with a newly improved dream. And I do believe in fairies because it’s my own nature to personify spirit(s), to assign personality. It’s a Libra thing, trust me.

It’s also why I can talk about the natural spirit energy that animates each of the astrological signs through the personification of archetypes, which is a life long passion and a never ending story of discovery. Elves and fairies are akin to the lesser gods of our mythology and they do embody field and stream and orchard and river and hilltop and wood and meadow and tree and flower just as more chief deities work their archetypal energy through we humans. We are not just people but personifications of energy. I try to hit this fact home in every show I ever perform and it tends to go over people’s heads or overloads them somewhat. I suppose it’s not typical cabaret fare. But the fact is that believing in fairies and spirits, allowing oneself to sense, feel or even see them as some have is tantamount to exercising your imagination rather vigorously. So if nothing else believing in fairies is good for your creative health. Imaging is just dreaming while awake.

Give Me A B