Everything Old Is New Again

Two years ago, I began this Cosmic Blague project of writing here daily for an entire year, after which I began a second year, only to throw in the towel not quite halfway through another turn around the whell. The thrust of year one was to meditate and muse upon the Sabian Symbols which are images, divined by a blind seer, that illumine the cosmic energy of the day slash astrological degree of the Zodiac. I can’t do that again—and yet I probably won’t completely avoid doing so. As with the aborted seconed year of this project I provided a link to the corresponding day. Here is that original post entitled “I’m A Homo Sabian Too”  (there is an introductory one that precedes corresponding to the Equinox.)

Yesterday morning we hit zero degrees of the Zodiac, the Spring Equinox, a time for new beginnings, but I wasn’t feeling very beginnerish. The first degree of the Zodiac’s Sabian symbol is “A Woman Just Risen from The Sea; A Seal is Embracing Her”. And, like Aphrodite/Venus, we all emerged fromt he Sea sign of Pisces into the birth sign of Aries—the Seal is a symobl and totem of dreams and imagination. We emerge from the misty dreams of Pisces with those reveries clinging to us still. Sometimes nightmares cling, too. Which is why I was rather reluctant to start this project once again: Because I haven’t been feeling all that optimistic as a result of universal external influences. But I’ve come to realize in the last twenty-four hours that this is all the more reason to commit again to this enterprise. We don’t always reenter into our experience suffused with dreamy inspiration—sometimes we have nightmares to shake and, yes, from which to learn.

I’m tempted to say that I won’t be mentioning certain people, or rather a specific person, in this Blague. He who must not be named indeed. But that would be unrealistic and counterproductive. We have to name the nightmare and that name is Trump. It’s a terrible name which is fitting. I think it’s important to name him because he is perhaps the last gasp of the patriarchy diminished to an orange mass of spoiled brattiness. He has done terrible things and we have only begun to learn the extent of them. But what struck me most sharply was his refusal to shake Angela Merkel’s hand. He will shake any man’s hand, even if he has made enemies with said man. But he won’t acknowledge a powerful woman. Trump, I’ve come to infer, has mother issues.

The woman rising from the Sea, each year, with the first tick of the Wheel, is a reminder that Nature, both Earthy and Cosmic, is Female. She is the source of life. She is the dream from which we all emerge. The dream that is existence. We are figments of her imagination. We are details of her reveries. And some of us are terrors—tangerine dreams—errant emanations who have turned their back on the dreamer, whistling in the fleeting graveyard of a lifetime, imposing futile will, investing in their eternal retirement in hell. Ultimately powerless, such terrors must be checked, our recurring nightmares cured once and for all. We don’t do this by any other means than by examinine and excavating our own psychology, the traumas that give rise to ingrained patterns, repeating and repeating. That is not renewal. That is self abuse, self inflicted.

How can Trump be president you ask? Because that nightmare—a haunting, of the our collective negative behaviors that now torment our conscience—this is the demon of our own cultural creation. This is what we get for not being unerringly kind and kindred. Every time we turned a blind eye to racism, to sexism, to oppression, to greed, we had a hand in creating this coral hobgoblin. This is the slimy seal with which we have emerged this time around the Wheel and its best not to ignore it but to shine the brightest light upon its salmon skin. In full glare of loving and compassionate activism It will dissolve like Capn Crunch in the milky environment of true Mother Love, the witholding thereof being the ultimate culprit for this sleazy condition in which we uneasily, temporarily find ourselves. 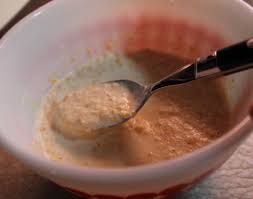 Not Called The Ram For Nothing