I have a way too many stories that might be triggered by today’s image, The Garden Of The Tuileries In Paris, having lived in Paris and spending a great many years traveling there, first for fashion shows that saw me walking through the garden daily, and then later for chunks of time when time and money would allow. Just last winter we took an apartment for a few months. Nothing about Paris ever gets tired for me, and I could never bore of the Tuileries, especially, except in encountering a scam artist or gypsy thief. But even that can be culturally interesting if you have your valuables firmly tucked. So I don’t think I will story tell today as I do need to save my energy for the show we’re writing; but, back I will offer some anecdotes.

I worked in Paris in 1985-86 at Passion magazine, which was a super big format magazine and we would have vendeurs who would swing by the offices to pick up big stacks that they would then sell on the streets, in the parks and gardens, in outdoor cafes and even in restaurants, walking through crowded bustling rooms of conversation and scraping cuttlery and tinkling glasses, Passion along with Interview and City and whatever else might be on offer. Before I got a job at the magazine, I too sold them on the streets for a day but I was terribly bad at it so I was grateful I was hired for an actual job in the magazine. I did though hand them out to front row faces in the fashion shows which in those days were in tents in the Tuileries not at the as-yet Carousel du Louvre. I remember handing a copy of Passion to Princess Caroline at one of the shows, saying, “here you might as well have one since you’re in it”—there was some story on her. I was always off-handedly addressing people that most people treated with uber respect and kid gloves. It was the eighties, and I had a socialist ax to grind and authority issues. Some years later, during a book signing for Sextrology at Colette, Princess Caroline would attend and tell Stella and myself, “I’ve heard so much about you.” Really? Okay.

There were several vendeurs of Passion; the most ubiquitous and prolific was called Jean-Yves, I believe (pictured below)  and one of them was this African guy who’d I see here and there around town, in furtive glances, out of the corner of my eye. He was very dark skinned and small and had a shaved head and was usually hidden behind these large magazines he was holding up. One evening Stella and I were out to dinner with a crazy friend of ours called Vivian whose outfit for the evening was a pair of mens striped flannel pajamas. It was the eighties. I can’t remember where we were having dinner, somewhere in the sixth arrondissement; and this fellow through the restaurant and I grabbed his arm and asked in bad French “tu vend Passion”, to which he responded “mais oui”. I explained I worked at the magazine and invited him to join us, which he did. He ordered champagne and I remember thinking that he must do pretty well selling those publications around town. He said his name was Jean-Claude he was from Cameroon and that his father was actually something of a tribal chief. Very interesting. He was highly educated and spoke English and French superbly and after we killed the bottle of bubbly he invited us to a club privé called Le Flashback. Off we went. 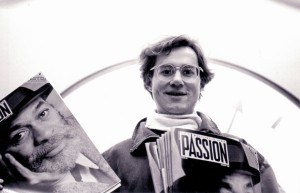 The place was dark and filled with poseurs and you had to purchase a bottle of something which would be placed on your table and you would pour and mix your own drinks. For some god awful reason we got a bottle of gin. The place was packed the dance floor filled with couples and, as was not unusual in France, single people dancing with their own reflections in the mirror that squared the entire room. I noticed Jean-Claude was behind Vivian with his arms wrapped around her cupping her now naked breasts as they writhed and I caught him in profile and suddenly realized, what a cotton picking minute, this isn’t the magazine seller after all. As horrible and probably racist as this sounds—I promise you it wasn’t—I had mistaken this small African dandy for the often facially obscured vendeur. But, uh-oh, when I asked Jean-Claude if he sold upper-case Passion he said “oui” thinking I meant the lower case sort.

In any case he wasn’t a gigolo and he and I actually became copains, hanging out smoking hash and drinking at his fancy Saint-Germain-des-Prés apartment. I once invited two French guys I’d met in my neighborhood, Jean-Luc and Phillipe, to hang out there with me. We ended up, as guys do, even ones who basically don’t know each other, wrestling, which in this case consisted of Jean-Luc, Phillipe and I each diving at Jean-Claude in turn whereby he would handily pin us with one move or literally throw us across the room. He was like a tiny Cameroonian super hero it was astounding. And the manner in which he defeated our moves with ease made us laugh hysterically as we exchanged glances of disbelief while, you know, being chucked into a wall. None of this of course has anything to do with the Sabian Symbol today at 3° Gemini which is all about “Formalism” but so what, it’s my Blague and I’ll blab incessantly if I want to. I will add this, that in a twelve-fold sequence, Gemini rules this oracle and given it’s rule of the third astrological house, it is associated with boon companions and all kinds of merchants, especially street vendors of newspapers and magazines. So there.