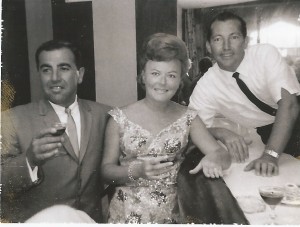 Apparently I already wrote a couple of days worth in my word document from whence I cut and then paste here; I remember, now, posting this directly on Facebook, on Mother’s Day, but this was meant to be a Blague as well.

(For last year’s meditation on the Sabian Symbol for this degree:  click http://cosmicblague.com/all-things-must/)

Mothers, mothers, mothers. They seem to either be the best in the world or warrant breaking up with them, if you read the gospel truths of Facebook. Mine was a Pisces, which means she was the best and the worst. I grew up in a time when you’d send your 9 year old son to get your packs or cartons of cigarettes, especially if you were borderline agoraphobic, which also meant you had to hide if the doorbell rang at the wrong time even if it was the paperboy just trying to collect some money…again. You might also be alcoholic and pass out at friends’ houses, and when I say friends I mean mine since agoraphobic mothers seem to like to only make friends with the drinky parents of their kid’s friends, even if said actually stopped being friends with them. You might still have to skateboard over and pour your poor mother into her big black Buick and teach yourself how to drive (her) home by simply trying to remember how you’ve seen adults drive in the past—thank goodness for all those 1970s car chases on TV. And then you put her to bed. That was even more terrifying than the driving. Then again you might appreciate the fact that she was sensitive, smart, highly tuned, psychic, spiritual, deeply empathetic and powerful and fancied herself a silver screen starlet, morphing before your eyes in Bette Davis, Anne Baxter, Polly Bergen and Gena Rowlands in the course of a single sentence. Or that when asked “whom do you love most in the world?” she would reply “me” unironically. Or that she mainly watched PBS, but for Donahue and 60 Minutes or the occasional mini-series of the Thornbirds derivative. Or that, when I first went to France at nineteen, her bon voyage present to me was a hardcopy of James Joyce’s Ullysses which she inscribed, “From One Irishman to Another In France”. That she knew things. That her PIsces eyes pointed inward toward a soul and even when she was staring right at you, you got the feeling she was staring right at her. The true her. The one that didn’t smoke or drink or even go to AA meetings for twenty-five years or pretend to care about the banalties of life beyond her books and the ubiquitous Snickers bars on which she chewed, on one side of her mouth, the same side from whence she spoke, as Pisces often do, or laughed that huh-huh-huh laugh as if she were simultaneouly still exhaling one of her Salem 100s. The one that loved her familiar—her twenty-five lb. Persian Blue mix, Kerry, who followed her everywhere and mimicked her every move as it lay with her in bed, in the air-conditioning, summers, as she polished off yet another Maeve Binchy, her teeth Snicker sticking together. I would suspect that after herself and Kerry, I might have been a close third. (With father and barkeep: Peggy Leone née Margaret Anna Mary McDonough.

Nor Do They Spin