Of Skeletons and Closets

Today we look at power, and worldly power at that. They symbol for 11° Aries is The Ruler of a Nation or The President of a Country. I think the original might be the former and yet the latter expresses the nature of the symbol. For we are not looking at the energy of a monarch or a dictator but the ruler of a democracy for the most part. A president presides, he has the power to execute the will of the collective, but he also has the responsibility to do so. I think of the energy of a president being very Libra, whereas that of a king is super Leo. Democracy and social order, balance of power, harmony among people, are hallmarks of the sign of Libra the mottos of which are “I balance” and “we are”. And being the 11°, one might equate it with the 11th sign of Aquarius in that sign’s Utopian vision. When one is the ruler or president most energy goes to keeping the peace, not just with other nations, but within the ranks of ones own, and among ones people. Where are you the ruler? In your family? At work? In some department? When you are in charge, mainly you deal with the censure of not doing things correctly. Or perhaps you are one who points out how those in charge are deficient; but if you were put in the lead role you would likewise be a target for criticism.

I was watching the documentary on Scientology, Going Clear. And besides the abuse of power by leaders of that “church” what struck me was how the IRS caved and gave Scientology tax-exempt status mainly because they were worn down by lawsuits. The IRS took the lazy route. And as a result that “church” has gotten away with murder, probably literally. The litany of abuses, the brainwashing, the blackmail is staggering. The documentary really left me angry at our powers that be, which allow this type of organization to proliferate. The billions of dollars Scientology pockets while those in its ranks suffer abuse is one thing; but the fact that “we” allow this organization to exist—which it can only do as a tax-free entity—is beyond me. My hope is that this documentary triggers some kind of upshot the way the documentary on Robert Durst brought about his arrest. I know it’s not as specific as the Durst situation—evidence coming to light—but seriously we have to crack down on this crazy cult. There was so much to the story that wasn’t in the documentary. The disappearance, for instance, of Shelly Miscavige, wife of the so-called religion’s leader David Miscavige—she hasn’t been seen in seven years.

In a democracy, we can all be Ruler of the Nation, theoretically. Any organizations that exist within our democracy that disallow that same capability for self-empowerment should be shut down. How is it that Scientology is protected by the First Amendment but Edward Snowden isn’t? If I were ruler of the nation, if I could, I would throw the money lenders (lobbyists) out of the temple (halls of Congress); I would impose caps on campaign fundraising; I would create a new-deal type works program for repairing our infrastructure; I would pardon Snowden; I would revoke any cult’s tax exempt status; I would outlaw GMOs; I would break up big Agro; I would impose oversight on big Pharma; I would tax the one percent at the same rate Eisenhower did in the 1950s, I would do a lot of things…if I could. All impossible, you say? That’s the real issue. Why is doing right by the people impossible? Why are venal, oppressive maneuvers all highly possible? Why do bad people in power always seem to win out? The main answer is: That, for the most part, anybody who needs to be in a position of power probably has a screw loose somewhere anyway. They are driven by ego. I love me some Hillary Clinton but really why does she need to be president so pressingly? I don’t think the prime answer is: to do good. I’d like to say I love me some Obama, for the most part, and he has attempted some good things; but he has also kow-towed to some of the worst people and entities on the planet, like Monsanto. Why? Maybe not because he wants to. Maybe there are threats involved.

That’s be the way Scientology operates: on threats. They have a dossier on “church” members yay high, one that “church” members provide them, admitting all sorts of shit in their audits. The irony of religious participation taking on the form of a visit to the IRS not withstanding, “church” members give their power over, or they believe they do. They are no longer the Ruler of (their own) Nation. And when you’re a celebrity Scientologist, the “church” uses you for their own PR purposes, and you get major perks and payoffs. Would that we could all boycott any project made by these celebrity Scientologists, or better yet: If we could send memos to Tom Cruise and John Travolta and Elizabeth Moss and Beck and Laura Prepon and Greta Van Susteren and Giovanni Ribisi and Kristie Alley and all the other famous “church” members saying that we don’t care what sexual proclivities they might be repressing. This isn’t the 1950s actually; and some spicy tales from their boudoirs might actually make them more interesting because, at a glance, this isn’t the most exciting bunch ever to appear in the same sentence. 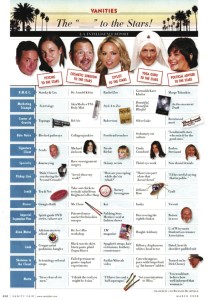 Seven years before Graydon Carter and Vanity Fair published the story on Scientology’s search for a wife for Tom Cruise, the magazine included us in their “L.A. Intelligence Report” in the Vanities section in the front of the book. To be fair, it is a tongue-in-cheek page that mixes fact with fiction. Although, in our case, it was mostly fiction. First of all we don’t live in Los Angeles. Anyway, we were deemed “Psychics to the Stars” and one category in the chart-format piece was “Skeleton in Closet”. They said that ours was “Scientology referral swaps”. This immediately made us uneasy. And then came the questions all on the theme of “is this true?”; and despite putting out a statement that none of it was, our business is built upon a real consultancy with real paying clients, most of whom would not be comfortable if we were actually in bed with that awful cult.

I wrote Graydon Carter a letter pointing out the problem. He refused to print any kind of apology or retraction which, to be honest, I didn’t expect. His editors were vaguely sorry, especially Matt Tyrnauer who actually availed himself of guidance from Starsky + Cox on a regular basis, and yet, as often happens in this situation, we seemed to be personae non grata for speaking up about it. As if we should be so lucky to have any mention at all by Vanity Fair. But I do think the magazine was concerned with the legality of the situation, printing something not only untrue but potentially damaging. I then received a letter from Graydon’s office barely apologizing for any distress this had caused and how they planned to make it up to us with the publishing of our next book, which they would champion. They never did. In fact, they pretty much cut off all communication with us. Scientology calls it: To Disconnect. As a Ruler of a Nation, in this case a sensational magazine which is indispensable on long flights, Graydon Carter is well aware of his power, but perhaps he understimates the abuses thereof. When he raised the ire of Scientology, himself, I thought there was something karmic in it. The cult of celebrity vs. the cult to end all cults. If only.

Who Are You Now?