In the Virgo-ruled oracle of Libra 18°, Two Men Placed Under Arrest, we explore the “breakdown in the constructive relationship between the individual and society and the expectable result.” Now, society has it’s own existing order based on a series of laws; and the individual has his own order determined by his own conscience. The criminal conscious may feel no remorse and therefore clash with the rule of law; but just as often the laws in place are unjust ones and the arrest of the individual is a sacrificial act in service of seeing true justice prevail. The two men in this oracle might be the gruesome murderers in Truman Capote’s account In Cold Blood; or they might have been caught in some kind of harmless, intimate act which laws built on hatred persecute. I make this specific comparison on purpose to float the notion that unjust laws put on the individual might actually inspire a sort of psychosis that drives the individual to actual unthinkable acts that psychological stem from repression and revenge upon the society that doesn’t accept him or her.

The British, for instance used to send criminals to Australia, literally alienating them in an external, actual prison island. But this also serves as a metaphor for the inner prison (in addition to the ultimate real one) that someone like an Oscar Wilde might have been put into. Nelson Mandala was probably more drastically imprisoned on the metaphorical level than he was during his actual incarceration which resulted from the expression of both his personal and universal calls to liberty. The retired sea Captian of the previous oracle was in synch with the order he observed because he was at least a co-creator in it; he was retired and was probably witnessing an order that took him much pains, over Time, to institute. But what of the young wo/man who has yet to achieve this level of sympathy between his inner and outer worlds. The two men in this image might easily have been those who simply sought to marry not too long in our society, or still are in way too many places in our small but violently repressed world. Now, in America for instance, the two men in the image can observe the way the retired sea captain, does, the positive, calm, serene results of their having fought for the inner order to be reflected outwardly, at large. 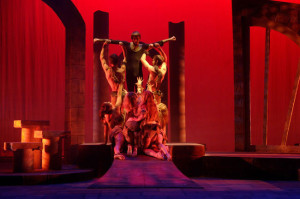 We want to face the consequences in the way the sea captain did, not in the negative context in which that phrase typically echoes. Joan of Arc was punished for her unacceptable actions by the very society she served and saved, really and spiritually. In terrestrial terms she never made it to the other shore, and though sainthood debatably transcends that sad failure, I doubt she preferred it to just be given a pass—she simply couldn’t compromise, personally, for the sake of the power she ultimately wielded for her fellow man. The sea captain of the next oracle didn’t have to make that ultimate sacrifice because the stakes (no pun intended) weren’t as high; he made it to the other shore and saw what even radical changes he instituted become part of the new order. But as I said yesterday, this state of retired contemplation might only be in preparation for a new struggle, because, universally, it always is. Enter the two men in this image. We see them being arrested, but their ultimate consequence is unwritten here. There is a good possibility that their arrest and incarceration, like that of Mandela’s, might be the vehicle to their ultimate victory and leadership.

The onus is thus on societal order to more readily absorb, expand and change their own structures, laws of order to include the good struggles that individuals champion. The fact that there are two men here might merely suggest that this is not a struggle in which one is alone. American society has mainly evolved in the right directions via the women’s movement, the civil rights movement, the LGBT efforts, despite the blow back. We do have healthcare after so long without it. Gun laws and the prison system should be next. The educational system too. The laws must move in a direction to champion the oppressed who are only so-called because the world is lousy with oppressors. There will always be new struggles, but so long as the laws serve the oppressors than this dialogue remains no newer than that put forth by Rousseau or Locke, centuries ago. All ages should be those of enlightenment and the formula is really simple—it’s called the Golden Rule. It is fitting that today’s oracle is ruled by Virgo because that sign is hinged on human conscience. The Leo oracle of the sea captain expresses more that rule of the King who, happily, created a little slice of ordered heaven, a haven, his camelot; but he could have easily been a tyrant, a pirate viewing his pillage. The shift from Leo to Virgo is like the shift from the feudal system to that of guilds, a time characterized in literature by morality plays like Everyman—Virgo is the Everyman of the Zodiac—as we humans are the battleground in the fight between virtue and vice, our conscience being at the front, where we must dig our trenches. Law and order (the resulting Balance between these seven virtues and vices, which, in their full weight, are measured by the next seventh sign of Libra) should be written in the ink of our very human collective conscience which, the goodness of which, tips the Scales over the the petty evil.

Why, if most Americans don’t want guns, does a relatively tiny lobbyist group of wielders win out. Greed (a vice). And the greedy are way more organized than the rest of us. But what if they weren’t. What if we stood outside gun shops the way pro-lifers hassle abortion clinics. Is it because hatred and greed are stronger organizing agents than goodness? Or are we struggling with our own vices of say, sloth or even gluttony—so long as we have all we need why fight, right? Well that’s for your own conscience to decide I suppose.