Dancing Couples In A Harvest Festival: Now you’re speaking my language. It’s June 11 and this is 22 ° Gemini and the cherries are barely ripening on the trees outside and yet the usually elusive Cedar Wax Wing is out in abundance, unabashedly eating the fruit, before it’s truly ripe, leaving just pits on the vine. Pits hanging from tree twigs—it’s pretty comical. Have you ever seen a Cedar Wax Wing? I hadn’t for years. It was the one bird I wanted most to see but it eluded me. Now they are everywhere. At least until the fruit is gone. The males squeal as if the fan in your window is squeaking. He has a brighter yellow belly and a sort of a tuft that he thrusts from his head and bolts of red hidden beneath his wings; but even he, the male of the species, is sleek and tawny and under the radar. 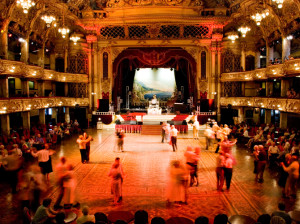 I awoke to Rick Steves this morning on PBS. Don’t get me started. You know his company is called Back Door Productions, right? Enough said. I love the way his “guides” are always some guileless young guy with a peach-fuzz moustache. Whatever. Point being: Rick and Steve are already the gayest names in the Universe. But to put them together? Where am I going with this. Oh yes: The episode to which I awoke was an oldie. He was in Northern England and he brought his (then?) wife and kids. They went to Blackpool where there was a ballroom with elderly people busting choreographed moves that would make your head spin. I love places like Blackpool. Asbury Park and Belmar, New Jersey, of my youth, were like that once, and they weren’t copies. They were built, architectually, around the same time. And their look is similar to Blackpool. There were “pavillions” on the boardwalk where old couples used to dance. Okay fine I’ll deal with today’s oracle:

We are seeing common wo/man enjoying the bounty of civilization. Remember the middle class? I’m old enough to have grown up in it. I look at the young people around me and they closely resemble the Europeans my age, at the time, I’d encounter traveling around, back during the Reagan era; when, for instance, it was nine francs to the dollar. I don’t like the euro. I miss francs and lire. I miss pre-globalization. I’m so, so glad I lived it. My youth strikes me as so post-war now. I’m glad, too, that I lived in New York in the late 80s and 90s.  I’m happy to have sat front row at fashion shows before fashion was “a thing” and could take in the beauty of Linda, Naomi, Helena, Tatjana, Cindy, Kristy, Claudia (and, okay, Stephanie) and later Kate, all at once—all at once. Breath-taking. I would plop myself down front row and wait for someone to move me. They never did. I actually belonged there, probably more than most. But I did get the fish eye from Anna on more than one occasion. I suppose I took a Vogue seat. Oh well, too bad.

The middle class. Remember us? Now we have to be/pretend to be upper or lower. I’m bored. I’m bored with seeing my East Village New York friends style themselves like Upper Eastsiders from the late 70s. Really? You’re working a Nan Kempner look? How did we get here? Just as I’m tired of people grasping at some rent-stabilized life raft that no longer exists. You know what: it’s over. Get a livelihood. I sound horrible. I am horrible. I am sometimes horrible. You better know that about me. I despise artists, especially, who are in love with poverty and lament, lament, lament a changing landscape. Hello? That’s life. Change is the only constant—remember? Put that in your performance art piece. Psychosis is not performance art, by the way. Just like eighty year olds in Blackpool still trying to do some version of the Lindy Hop every weekend is a form of OCD. For real. We need to move on. I’m sorry the East Village is too expensive. Move. And maybe not to Brooklyn which is just as expensive. Move to Camden, New Jersey; or Blackpool or Asbury Park or, well not Tivoli. But move places. That’s what the American middle class did. They left the city and moved to new places, outside. They created new environments. They didn’t sit around bemoaning the fact that some dive bar or noodle joint or some barely great (to begin with) pirogi emporium suddenly lost its lease. They weren’t sinisterly-sentimentally attached to their past. I saw supermodels all at once and I’m over it.

Of course today’s image is ruled by Capricorn, associated with tradition, the tried and true and old age. Harvest. We reap what we sow, so get reaping people, get reaping. Stop living in the bygone. “Stand in the place where you live,” or move the ef on. We are all going to die. Good news: it happens to all of us. So think on your good deeds and think on your sins and laud yourself for the former and forgive yourself for the latter. The abundance of harvest is the byproduct of your generosity of spirit. If you’re a stingey lady/man than you can expect dearth as you approach death. But if you are a kind and giving piece of work then there will be bounty for you at the end of the line and beyond. And you can change your past history by busting a major move in the present. Like those bumper stickers say, and I’m sure I’m paraphrasing: Do Kind Things…? no that’s not a bumper sticker slogan…what is it?…oh, something about performing random acts of kindness….is that it?…anyway you get the drift. Sow what you reap.