At 23° Aries the Sabian Symbol is A Pregnant Woman In Light Summer Dress. Well it’s not summer so, reading this metaphorically, we are speaking about fruition, not just with the pregant woman but with summer being the time of harvest. I don’t have a lot to say about today’s oracle and apparently either does Dane Rudhyar or anybody else by the dearth of opinion regarding this on the interweb. So maybe that speaks loudest. What can you say about a pregnant woman in a summer dress? It’s both banal and miraculous an image. Banal in the sense that we’ve seen this image before in life and typically it inspires a sort of pity that said lady is pregant in the summer which can’t be all that fun. Miraculous in that the image is so stripped down to reveal the simple mystery of life being created. But I am struggling a bit here.

I’d like to think that today was about recognizing what it is in us that is incubating and coming to fruition. What magical child are we about to give birth to? What bun do we have in the oven? Rudhyar speaks of today as the culmination of the male pugilist of two days ago and the garden, of yesterday, which he likens to a woman. So today we have a baby brewing. Okay, well, that seems logical. But I’m not blown away by this image. It seems all too natural perhaps. Maybe that’s it. Maybe it’s the fact that we really can’t take credit, as human individuals, for the most important, elemental occurances in life. Nature runs its course through us and it’s not a feather in our cap really. Any species can procreate, no big deal. So maybe it’s about the humility of being employed, if not used, by nature. That we are just temporary pawns in Nature’s larger plan to create life in general but that we, as specks of singularity, really don’t matter much and certainly not for very long in the scheme of things. It’s always about what or who is next. There’s always somebody new waiting in the wings, or in this case, the womb.

Okay let me find some personal connection here….let’s get back to pregnancy being a metaphor for possibility, which given this image, seems imminent. What are we bringing to life? The image of a pregnant lady in summer was nowhere more harrowingly portrayed than by Mia Farrow in Rosemary’s Baby. She was rocking her summer shift dress and short seasonal hairdo. She was lugging around a suitcase through New York in, what?, the full glare of August? She was also carrying something she didn’t count on bringing to light. But in the end she was going to care for it, despite it being a diabolical outcome. I always thought that Rosemary giving in to mothering her demon spawn was the very image of “owning it”. I like children. I do. But I dare say I don’t like the offspring of bad parenting, no shade on the kiddies, but a major Bea Arthur look askance at the parents who obsessively focus on their children, revolving everything around them. Nature did not intend for your child to be the center of the universe and certainly not the centerpiece of my dinner conversation or the prime mover of every plan of action. I feel for kids with overly attentive parents almost as much as I do for those with neglectful ones. But let’s swing back to metaphor land. 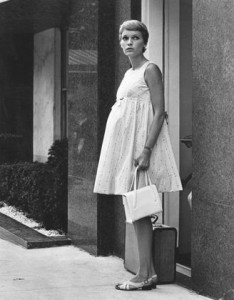 Let’s say the bun in the oven in this oracle is the creative plan you’re hatching. Can you give it life and leave it enough alone? Or are you going to obsess on, and kill, it with your constant tampering? One of the things I feared and am now loving about doing a daily blog is that I don’t have the luxury to make it perfect. I don’t know what I’m getting each day—I have no idea what the Sabian Symbol is tomorrow just as I didn’t know what image today would bring until I sat down twenty minutes ago. I have to just give birth and then move on. So that means I have to be as mindful as I can be in the birthing process. Once it’s out there I’ll probably never look at it again. It’s true with most creative ventures—ask any filmmaker, musician, novelist, etc.—typically once they’ve delivered the product they were longing or commissioned to create, they scarcely look at it again. I don’t think I’ve read Sextrology since I last had to for editing purposes. Once the bun is baked it’s pretty much what it is. Yes you provide a happy, nurturing environment for your child, just as you might promote your album, book or try to get your film into Sundance; but if you made as much of your creative output as modern day parents tend to make of their children with ridiculous names you would be labelled nuts and narcissistic. The irony being that narcissism should only be about you. Being narcissistic via your offspring because maybe it’s your only point of pride in life, well, then you’re the devil, Rosemary; you’re the devil.