Well thank you Mercury retrograde for making a full week’s writing on an upcoming show magically disappear from my computer. Now, before I shake my fists up at you, I want you to know that I fully entertain the idea that what I might have already written was crap and that you wanted me to start again to create something better; at the same time I am fully aware that you are a divine trickster and simply get off on this sort of thing, like when you stole Apollo’s entire herd of white cattle, tying brooms to their tales to erase their hoof prints. I know who you are. I am a Libra, my sun is in that sign, so archetypally I am a son, like Linus, the orator, of that golden god; and yet, I am a Virgo rising, so my entire chart is ruled by you until such time as they discover a planet called Vulcan or decide to give the sign’s rulership to that once-and-future planet Chiron; in the meantime, I’m caught in your grip. And seemingly happily so. As the eternal adolescent god, the messenger, the Puck, Robin Goodfellow, Peter Pan, Robin Hood, and even Batman’s eternally youthful Robin, I have always related to you; dating back to childhood superhero games I never wanted to be Batman (boring) I wanted to be Robin, as he was so shot through will possibility, potential, his future unwritten, and he looked fantastic doing the Watusi in board shorts in a televised nod to beach movies of the time—likewise I would happily play Will Robinson in a childhood reenactment of episodes of Lost In Space. Again I digress. But what else is new?

Today marks the first day of Gemini. So I’m half expecting an oracle of newness from this Sabian canon. You should also know that I’m a bit tired of tying the Blague to these oracles, just as I’ve become reliant upon them to motivate me in a writerly direction each day. Of late I have been saving my energy for writing a new show but as all that material has magically disappeared, as I say, I figure I have a choice, or am at a visceral crossroads, to either put pencils down and say ef it to one or other or both or all of the content on my daily list to create OR to blow it out and write like a maniac, even though I have full client days coming up and I’m actually moving house on Monday. If you know me you know I’ll choose the later. I’m that kind of self-flagellator.

Okay so get this: The symbol for today is A Glass-Bottomed Boat Reveals Undersea Wonders. Let’s set aside the fact that both Stella and I both had dreams of sharks and/or sea-monsters rearing their threatening, murderous heads last evening, I do declare that we might be looking at subterranean, Chtonian energies making their presence  known. If the sign of Taurus, fixed-earth, the Garden, leads to temptation in the form of that Chotonian character, the serpent, then Gemini, newly entered, embodies the duality—the Twins—of consciousness of naked or clothed, right or wrong, good or evil, having eaten from the tree of knowledge of which. I hope that was correct english. The point being that, for ill or nil, we are having our minds open to levels of consciousness previously unexposed or unexplored by us. What we say may be beautiful. It may be astonishing. It may be scary as hell. The point is we are thinking about it. Gemini’s motto is “I think “and the fact that this oracle hinges so much on a new awareness, an opening of consciousness, is pretty mind blowing. Duality is an awareness that we exist on (at least) two levels. Our conscious mind can often be the most unconscious part of ourselves, going about its quotidian business without check or balance; and then, boom some shift upward in consciousness, or some sense of the yearnings of the subconscious, create a divide; we all have divided minds—this is reality. If we didn’t we would likely be insane. The fact that we think about what we’re thinking or what motivates us, and that we question the workings of our mind, is likely the mark of sanity. 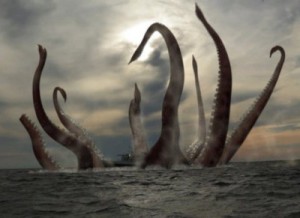 We all are gliding through life in a glass-bottom boat. We can choose to look down into the recesses of our minds and hearts to see what lies beneath. There is surely benefit in doing so and there may yet be danger. Right now, I’m keeping my head above board because if I look to delve too deep I might find myself caught. I will not let even the tricks of my conscious mind plunge me into the depths of negative emotion. Au contraire: my emotions are my guide—in the metaphor my emotional life is represented by the large body of water—I am the water—the glass bottom boat is only my mind that gets to glide through it with a window on its workings. My inner world is filled with shimmering and iridescent creatures, embodiments of my goodness and my imagination, and with sharks and probably krakens, emanations of my self-destruction. But, you see the mind, though a sometime trickster, is also clever and light and lively and doesn’t wish to become mired; instead it allows me the facility of safe flight or sailing over my unfathomable nature.