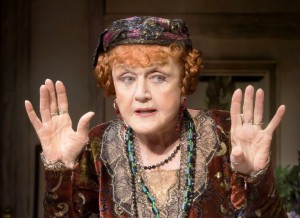 (For last year’s meditation on the Sabian Symbol for this degree: click here)

We were recently interviewed by British Vogue for a forthcoming article. I received a follow-up question today by email— It is my sense that astrology itself goes in cycles of fashion. I think we could identify a high interest point in the 1920s, perhaps? (I think of Madame Arcati and Carl Jung and the dissemination of newspaper horoscopes). And perhaps also in the ‘New Age’ late-1960s. And maybe also – now?

It inspired more than a sentence worth of response:

Madame Arcati is a character in Blithe Spirit not a real person. And that play debuted in 1941. I think you mean Madame Blavatsky the Theosophist? And that is the spiritualist movement.

Popular astrology (in the form of newspaper horoscopes) began with the birth of Princess Margaret in 1930. And astrology may have become more a thing in the late 1960s but it was during the me-generational 1970s that it really had mainstream popularity in the form of Linda Goodman’s Love Signs, the biggest selling astrology book author until we came along. In the 1970s casting individual birthcharts was as artisinal as it was since the middle ages, where charts were done by hand.

Look, you’re talking different forms of astrology. Real and faddish. The point is that it might have been faddish at various times in the 20th century where astrology enjoyed popularity. But if you’re making a case for it being more popular in those terms now then you have to justify the fact that Vogue and Vanity Fair and other popular magazines, with a certain sophistication, got rid of their astrology columns thinking they were no longer relevant. That would disprove your point.

What the point is is: Astrology is no longer a faddish thing. You have to remember the Quadrivium, curriculum of medieval university systems in which astronomy was one and the same as astrology. All major cathedrals have some Zodiac pattern or reference BECAUSE astrology was seen as evidence of God’s plan and Divine Order.

Back to the future: As Eastern philosophies and religions infiltrate Western thought, they bring their astrologies with them. Yogananda (Autobiography of a Yogi) and the Indian culture he grew out of all espouse astrological systems. What this did was inspire Westerners to look to their own existing astrology and Zodiac (which differs very little from any other Zodiac on the planet). The so-called New Age grew out of a combination of Eastern influences and New Thought philosophies and teachings here in the West, taking hold in the 1980s when Nancy Reagan had an astrologer in the White House. All major leaders through the centuries consulted astrologers, most notably Elizabeth I consulting John Dee; or the Romanovs with their Rasputin.

Carl Jung’s work with archetype is key. Joseph Campbell died with plans to write an astrology book next. People have come to realize that these high minded archetypes that come to us from the world of comparative religion and modern psychology are one and the same with the archetypal principles encoded into the Zodiac. We (and people) are coming to realize, wait a minute: This circular pictograph I’ve been staring at all my life was not just fodder for Peter Maxx drawings and songs in the musical Hair—the Zodiac as we know it dates back to the ancient Chaldeans who might have known a thing or two about a thing or two. So why have we been underestimating this thing and making it a parlor game for the past couple of centuries (which is a short amount of time for it to have been underestimated) in the scheme of its nearly 4000 year-old existence.

So the upshot? We don’t think astrology is experiencing another fad-period of popularity. We think that it is being permanently cemented into modern thought, philosophy, spirituality and culture. We see it as playing an increasingly larger role. We see more psychologists using it working with their patients just as we combine both previously separate schools of practice. People worship god ubiquitously without any proof of the existence of a divine being or beings. While, even from a (pseudo-) scientific perspective, the predictability of the movement of the stars, a documentable cosmic order is not only reassuring to people but it provides a logical basis for trusting the effects of the movements of the celestial bodies. From a scientific standpoint: People understand that the Moon effects not only the tides and women’s menstrual (moon-stral) cycles and that surgeons avoid cutting on full moons because bleeding is increased; so if that tiny orb has an effect on us why wouldn’t giant Jupiter or Venus or Saturn since we are in a SYSTEM with them.

Again science: we know (something the Zodiac seems to have known all along) that physical matter is something of an illusion, that all is energy in various forms of density. As we delve microcosmically we understand that all existence is actually non-material (the message of the all inclusive 12th house of the Zodiac); and so what does that say? It says that we are energy, not to mention that every atom of our being originated in stars. We are stardust IN FACT. We are made up of the same material/energy. And just like I can’t tell you if there is a heaven or a devil or angels or gods or any of that. I can tell you that we have assigned archetypes and personages to express and describe cosmic energies. This is why each of the symbols of the zodiac are packed with myriad myth which are no less allegorical for spiritual and human principles than those spouted by Jesus or other prophets. The entire Jesus myth, which millions of people buy into, all started with three savvy astrologists following the movement of a single star.

I think the trend in culture which is more permanent than a passing fad or fancy is that people, the younger millennials especially, have a more wholistic view of the world in general. They grew up into a world of quantum physics and the internet and fictitious wizarding worlds that intrinsically ring true. They live in a world of unseen forces (which most/all are). And the work of New Thought leaders and Eastern philosophers and gurus and psychologists and spiritualists and yes, astrologers  like us, specifically us, (we have hundreds of thousands of readers with our books in 16 translations worldwide) makes more sense to them than a single religious story and black and white rules of right and wrong. So we make the prediction that astrology is here to stay and will only increase in popularity and meet with unquestionable acceptance because (as you know from reading even our books on general sun-sign astrology) it rings TRUE!

A Light That Never Goes Out