As we move from a Sagittarian-ruled image to what would be a Capricorn-governed one, we today, at Cancer 16°, find A Man Studying A Mandala In Front of Him With The Help Of A Very Ancient Book. A mandala gives symbolic form to what abundance and multiplicity one might have perceived in meditation, so in this way it combines the energy of the two previous days. The energy of the sign of Capricorn is conservative and preservative, the Capri-corn (goat horn) contains the plenty we perceived at yesterday’s banquet into what is known as the Cornucopeia, the container of the copious. And if here bounty refers to the vastness of all existence, the mandala seeks to formalize, concentrate and conform the vast multiplicity and complexity of the All of eternal existence into a perceivable form upon which one might continue to meditate. Here we seek to find footing, like the sure-footed goat, and to stabilize ourselves within the cosmic enormity. The mandala comprises the consolidation of such an effort. It’s the basic blueprint of the infinite.

The Zodiac itself is a mandala and a most perfect one to my mind. Though not purely geometric as eastern versions are, it is figurative in its imagery associating more readily in the human mind with myth and archetype for which the various animals and humans and objects stand. It might be regarded as a Fisher Price type pictograph as compared with the elaborate geometric patterns espoused in the east and yet I find it no less powerful or, as I say, perfect as it seems to encompass every thought, action, emotion, sense and the very nature and sequence of all things earthly and celestial as they relate one to another. Which of course is the purpose of astrology as well as the point of any mandala, to provide a formal link between the earthly and the cosmic experience. Of course the organization of the zodiac is geometric, a circle divided into twelve equal slices of celestial pie, the energies of each giving over to the next round and round, spiraling upward infinitely. It has a lot more complexity than, say the symbol of the cross which speaks to man being at a crux, or crossroads of earthly and spiritual life, which may be true; but that is just one of so very many symbolic meanings that arise from something like a true mandala which is an elaborate symbol system, again, something of a blue print telling us how cosmic nature functions, and we in it.

I think certain art functions as mandalas. Mondrian and Kandinsky come to mind in their each unique but allied visions of distilling thought-forms into points and lines and planes. Of course Kandinsky wrote a book entitled Point and Line to Plane, and also Concerning the Spirituality in Art. If Kandinsky were to write a book about the Zodiac he might have called it Line and Point to Plane because the signs of the Zodiac in turn are cardinal, fixed and mutable, repeated four times. Cardinal translates to a line, moving, directional and initiatory, fixed of course translates to a point, and the mutable signs are indeed planes in that provide a field, on which the preceding energies of the cardinal and fixed signs are negotiated. 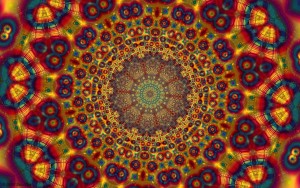 Mandalas seek to formalize the infinite which would seem an impossible task and yet the complexity of the mandala does manage, on the earthly plane, to represent that vastness, in and of itself, while it creates a portal as well to mind-blowing eternity, revelation. The cardinal-earth sign of Capricorn is symbolized by a mountain, which the goat is best at climbing: the mountain is a vast astounding structure which provides a seat upon which one can receive revelation. That is for which one goes to the mountain, in the metaphoric sense—Sinai for instance. It is also the seat of divinity, immortality—Olympus, Shangri-La. But I have a more ready example of the notion of mandala at work in every day life…

…it’s called your every day life. Meaning, every day we create structure; every day we try to systemize our existence, whether in the putting together of pressing projects or in the management of our household or business, in the formalization of our relationships or the acquisition of knowledg through learning, in any creative venture, in any anything, really. So what is the stuff of life but the formal organization of the mysterious animation that is us and life itself? Is the multiplicity of organisms, or the system of just one organism, not an infinite mandala, the formalization of the spiritual? Are we not all living mandalas, a physical system and network so vast and varied as to be infinite and inexplicable just as is the universe itself? Can we ride that notion? If we do we find that we are more apt to allow things to happen through us than we are to try and make them happen. In any case, that’s my own mantra for summer and beyond ad infinitum.