Yay! The image for 16° Aries is Nature Spirits Are Seen At Work In The Light Of The Sunset. So it’s not just me seeing them. Phew. Actually, I saw them as a child (as did a tall Baroness I know), an experience that peaked at the turn into adolescence, and, yes, it was typically around sunset, in Spring or Autumn, when they’d come to light, peeking out from their habitats, usually below exposed roots at the bottom of hillsides, along a creek. That’s where I sensed them most. I kind of love this supernatural oracle happening on Easter because, really, I don’t know what’s wilder, a savior rising from the dead, or hmm-hmms (as we call them in our house) going about their biz. Today’s symbol points to our ability to attune with nature and the power of unseen forces. Way ahead of you.

I know Stella will think of Ireland. We got lost in the West one day, where the road signs were suddenly all in Gaelic. We kept going in circles and we knew we were being toyed with by the hmm-hmms (we dare not use their real names); so we employed a trick we learned from the film Hear My Song, ever seen it? You should: We pulled the car over and turned our shirts inside out and started on the road again, and around the very first curve, we were stopped in our tracks. I kid you not: Standing along the road, some holding hands, were what appeared to be seven children, the “oldest” of whom was, I’d say, ten years old, tops. And they were all in order according to height, the littlest one appearing to be about two. And get this: in their non-clutched hands they were holding tiny metal tools. That’s right. A little spade, a tiny axe, wee mallets, all very antique looking. These “children” were positively diminutive, as if ancient Pictish blood ran strong in their veins, the oldest tallest boy, one would imagine, being an Owen Meany of sorts, compared with those his age. And how to describe their faces. Like slices of strawberry shortcake. Big round white poreless faces with cheeks shot through with ruddy flushes, not chubby but wide with strong broad cheekbones, their some dark and some sandy hair swooping across their brows, stuck, sweaty, to their skin. Because apparently they were working. And they seemed to be waiting for us, because they flagged us down, not we them.

We cautiously rolled down the car window and a collage of curious heads came into frame. “Are you lost?” Asked the boy whose button-down shirt was tucked taut into his trousers hitched by a thick leather belt, the skin of his lower calf exposed where his socks had fallen down and his pants had grown too short—as if that were possible. All their shoes and socks were muddy and they smelled of grass and peat. None of the others uttered a sound, as if they were one collective organism, clinging here and there to itself, with one workable mouthpiece, the others appearing to be purposefully shut tight. We explained that yes we were lost and told them where we were trying to head. And the boy wiped his Dondi swoop of hair from out his crystal blue eyes, a trait the collective shared, and said “Now…” launching into a series of directives pinioned with Gaelic names of this cnoc or that beleach. Glazing over at the musical guidance, we didn’t jot anything down, but just took it in, until the medusa of dirty, sweet, sweaty, and some snotted, faces all began to smile gappily, and nod their noggins, only one of which, apparently, was capable of thinking in English, we were sent on our way, the wee ones waving, again draped in a line across the road, holding hands and tools, in our rearview mirror.

Gleaning from what our friend Dane Rudhyar has to say (he took on that name from the Vedic god Rudra, the regenerator—it’s ruddy implications befit his sign of Aries), which isn’t ever easy to do: The sunset symbolizes fulfillment, as in “the day is done” and it is at that time when we can “see” these nature spirits, which would be hidden from us if we were too focused on achieving, in life or in the course of our work day. He also defines these spirits as being the harmonizing, balancing, guiding agents of a natural biosphere. That is to say, viewing the Earth as a living organism, the way each individual is, the spirits are likened to the endocrine system, or better yet, the chakra system of the body. The purpose of today’s oracle is to open us to the possibility of “approaching life in a holistic, nonrational, intuitive manner.” I’m down with that. Who’s with me? Rudyhar hastily adds, ‘what this means also is the process of “becoming like a little child.”‘ And of course he is quoting our main man Jesus who said “be ye like little children,” that is to say open to the wonder of the world because you will then witness it. 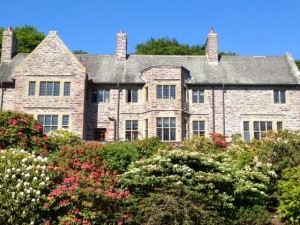 We flipped our shirts inside out and we summoned a whole gaggle of children, like seven dwarves or rather hmm-hmms hi-ho’ing off to work. Later in our journey we ended up at an old estate that had been turned into a beautiful inn, on a cool blue lake over which we glided in antique rowboat, and with a delicious restaurant on the premises that served world class cuisine. Our waitress, we will never forget, was called Bridget; and she was almost as tiny as the leader of that merry band we earlier encountered on the road. She had minute hands and that white-light clairvoyant far-away look simple, special peoplepossess. We have ever since thought of her as Saint Bridget, an ancient Pict of a little person over whose head our sophisticated jokes might fly, as she innocently and benignly smiled at us and served us over the course a few days with her contemplative mien. She might have been a young auntie to those children along that lush country road, they were so similar in look, with the same flushed cheeks and damp brow; and one could easily expect that at some point during her visits to our table she wouldn’t be bringing a smoked fish appetizer or a cheese course but matter-of-factly displaying a freshly materialized stigmata.

The name of the inn was Ard Na Sidhe which translates, but exactly, to Hill of the Fairies.