First I just need to say that the synchronicities are starting. I found yesterday’s oracle had a practicable takeaway, that is to say that The Serpent Coiling…, one interpretation of which is Kundalini energy coiled at the base of the spine, came in handy during yoga yesterday as I really focused on releasing it throughout the twenty-six postures, and especially the two breathings we do in Bikram. Then, at the end of the day, we went for a little stroll to get some air—I’ve been nursing a cold and it was finally warm enough to amble here in Boston—and I was just telling Stella how I was trying to work The Serpent Coiling… oracle into my yoga when, at that exact moment, under my feet, on the sidewalk of Commonwealth Avenue, this appeared in the concrete: 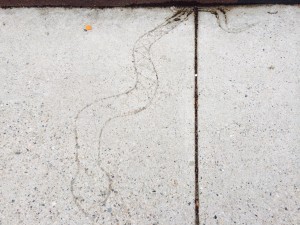 Needless to say it was an arresting signpost and I thought, a-ha, some cosmic validation.

Today’s symbol, for 15° Aries is An Indian Weaving a Ceremonial Blanket which I find uplifting on the whole. It feels like a little bit of magic which always invokes some Thoth cum Hermes cum Mercury energy, which would be apt if the third sign of Gemini had something in its bag of tricks relating to this day, date and degree. It feels fitting, given it’s “Holy Week” and those around us seem to be preparing for ceremonial holidays. Of all the Christian ones, Easter is most associated with special garments. The word vestment comes from the goddess Vesta (Greek: Hestia) and her devoted vestal virgins wore ceremonial garb as do most individuals, in most religions or magic or ritual practice. The Magician in the Tarot comes to mind as does Samantha in Bewitched—how I used to love it when she’d drop her housewife mantle and don her black robes; and of course it would have been the shaman of the tribe weaving that blanket, which was worn for life changing events, rites of passages, milestones, celebrations. So at this degree of Aries we are getting ready to ritualize experience. This means we are conscious of the importance of something impending, but we are also making it important in our weaving, real or metaphoric. We are fully participating in our experience, empowering ourself in that process.

The ceremonial blanket is something specific. Most notably, Native Americans from the Pacific Northwest as well as “plains Indians” created these wearable objects. They completely circled the individual, with no edges or seams showing, and they were particularly worn for ceremonial dances. Imagine an entire party of dancing people, all completely encircled in their blankets, ritually embroidered with stars and cosmic totems and imagery, the colorful designs lighted by a sacred fire, people spinning—as if humans were transforming themselves into pure spiritual form or particles of energy, a flash mob all decked out as string theory. Dane Rudhyar believes that Elsie Wheeler “produced” an “Indian” in this symbol because there was a need to stress an individual who lived more in harmony with the cosmos. That may be so, but I think it irrelevant. Both Jesus and Mary are spoken of as being seamlessly robed by the universe, the Milky Way, specifically. Mary is depicted as having three stars on her veil. Unlike the members of that “Indian”‘s tribe, we, the people, aren’t privy to so transplendently celestial a wardrobe, even on our highest holy days. I think that’s why the “Indian” was produced; because we have an example here of a culture who believed that a magical woven blanket could transport anyone, not just the priest in the pulpit or the Pope in his fancy silk robes, cap and slippers.

One cannot talk about weaving without speaking of fate. The Fates were weavers. Penelope wove and un-wove whilst waiting all those long years for Ulysses’ return. In the Libra Woman chapter of Sextrology we talk about The Prime of Miss Jean Brodie, a nod to broderie, French for embroidery, and how that character, an archetype of that sign, weaves the fates of her girls, reciting Tennyson’s “The Lady of Shallot”, whose namesake is weaving at her loom all the while. Libra is the “high priestess” archetype, the white-witch Samantha Stevens of the Zodiac who does most poignantly embody the power that weaving figuratively implies—designing, intending, charming, spelling. The great Libran sage, Florence Scovel Shinn wrote the new-thought treatise Your Word is Your Wand, and indeed we weave with words just as we weave with imagery, in both ways, endowing the “work” with our intention. The ceremonial blanket is only made a power object by the weaver endowing it with that power with every turn of the loom or stitch of the thread. Stories are called yarns, are they not? We weave our plots and they can be simple or elaborate just as can be a multi-starred design on a robe or blanket meant to transport us to new heights, spiritual or otherwise.