Things are spicing up after the boring previous symbol. At Capricorn 17° we see A Repressed Woman Finds A Psychological Release In Nudism. Fittingly this is ruled by Aquarius in a twelve-fold sequence. Just as the main archetype of the Aquarian male is (the water bearer) John the Baptist, the female archetype is Salome, of striptease fame. Actually her dance of the seven veils, one for each color of the rainbow, is a nod to her being a “descending goddess” like Iris, goddess of the rainbow, who brings enlightenment to, uplifiting, mankind.

This symbol is hinged on the escape from social restrictions and return to the body. In Aquarian terms, that is called: getting your freak on. The sign of Capricorn is ruled by Saturn, which is also the secondary ruler of Aquarius, Uranus being the primary one. Saturn is about restriction for the sake of keeping a resource pure, this is why even exclusive enclaves, and thus the notion of status, comes into play. Tradition is another quality that seeks to preserve (that which is working about) the past. Uranus is the reformer. It is revolutionary and seeks to break free of any shackles. Tradition, social mores and the like can preserve but also bind. The shedding of the clothing here is the removal of the restrictive elements in our society. Religion (a word that means a re-linking, a re-tying as to the past) have, in particular, created a disconnect between soul and body. Once upon a time sex and religion went hand in hand, fertility rites and sacred harlot-priestesses and the like. Notions of decency and modesty are fairly new additions to our socialized human existence; and most of us find away around these or experience breakthroughs on that score. As the repressed (Saturn-ruled) woman here is. 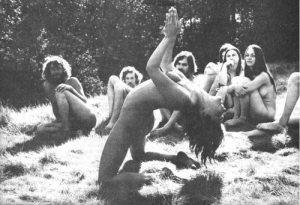 Funny that nudity would be shocking since it’s the natural state. Still you don’t see me parading around in the buff. Aquarius, the water bearer, is about rebirth, new life. And in a sense getting down to your birthday suit is an expression of renaissance. Nudity is also a plain and simple response to the puritanism of the past, especially that in American society. Jumpcut to nude hippies at Woodstock. That freeing ourselves bodily can be psychologically liberating.