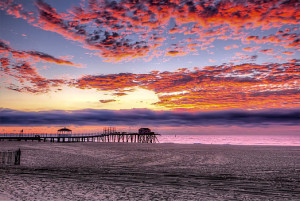 I am at once really looking forward to getting back into the hot room and also dreading the hell out it. The dread is pretty real. Meaning, I’m actually scared I’ll keel over. I’m going to have to be so, so gentle in this process of reentry. And meanwhile, I have been walking about two-to-three miles in the sand which is great. But these are all just words. The fact is I feel as if I’ve lost a part of my spirituality. That might sound strange. But once upon a time, in my early twenties, I was the guy reading the Vedas and the Upanishads. I think my doorway into spirituality was ironically J.D. Salinger as I wanted to be one of the Glass family; and they were all spouting Buddhist and Hindu and Christian and other forms of mysticism.

I associate these early glimpses of burgeoning mysticism with alone time on the beach at the Jersey shore where I would take my beach chair and my slim Salinger novel and a course catalogue from B.U. for, even, the first year of school, and all the Chronicles of Narnia I borrowed from my friend Ken, as I had never read them. And that was my literary stash and my comfort, taking me through the day, wiggling my chair with my ass to face the sun all day long, until there was a sort of click in of said heat, light and sea spray, and the world all faded to a blue wash, blood pressure probably dipping below normal. I would just space out and not smoke cigarettes, which, unfortunately I had been doing since I’d been eleven (god help me). And I just felt a sort of peace in waves of spare sentence structure and childlike imagination and eastern religion all mingles together with the smells of Hawaiian Tropic oil and greasy hamburger smoke wafting from the nearby boardwalk grill.

There was a very bearable lightness of being at that age in any case. And I suppose I was naturally manorexic—that is to say I liked to go long hours without eating because it gave me a bit of a high, airy sensation. But it was just the sense of not having to be anywhere. I began working my first job at fourteen, but at seventeen, the year before college, I made the conscious decision that I wasn’t going to work that summer. I was going to walk the one block to the beach. I was going to space out in the sand and read. Sometimes I would wake at dawn and creep out of th house and swim in the bit of water that was like a cover, next to the jetty, all pink with the rising sun. Just me and the gulls and the occasional imaginary shark—Spielberg was truly a buzz kill. Then I would emerge, no towel, and tip-toe run back to the house, drop my wet things, wrap myself in a towel and eat fresh cut cantaloupe my mother would have in a bowl covered with foil in the side-by-side fridge.

I didn’t know then that so much of what I considered to be hopelessly middle class would be looked upon, in hindsight, as luxury. I doubt my parents ever made as much money as I do, by my wits, in a given year. But I can barely make ends meet, without kids, while they would have had plenty to spare, there, for awhile; that is before economics began trickling down. But more than that I had freedom and autonomy. And I don’t think it’s age but culture that has whittled those things down to a nub. Cellphones were the start. We can’t be anywhere where nobody knows where we are. Sometimes after the summer crowds leave I can walk out onto the beach in Provincetown and just stay there, no satellite to find me, for hours on end. But I don’t have whole summers to do that as lucky as I am, not having a job where I work for anyone or punch a clock. If I had to punch a clock I would surely punch a more than a few people out cold. I know myself. I don’t like to be told what to do and/or when to do it.