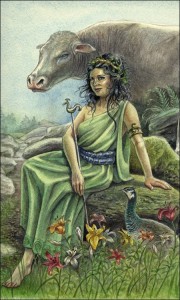 Maybe you’ve some experiences with the Taurus male and thought, though I am a take charge individual, I do expect a lover to get on top sometime. But it really does go with the whole pretty-boy Taurus scenario. They are total nature boys. Pretty boys. Not the rugged macho men or bratty bad boys we saw in the sign of Aries, no. They are very much the Adonis, and certainly the Narcissis-ists, personifying the archetype of those flower gods who, myth would have it met their fates because they were so damned passive. And just think of the Taurus men born under this flower-god archetype. Rudolph Valentino, was widely adored; Robert Pattison, is pretty passive; and George Clooney, total narcissist; Henry Cavill, he’s prettier than most girls; David Beckham, his voice is higher than most girls; Channing Tatum, “look at me, look at me”; Daniel Day Lewis, he wears pretty earrings; Jamie Dornan, oh well ok, no argument there; Enrique Inglesias, “I’m Mrs. Inglesias”; Peter Frampton, classic, nearly cartoon nature boy; Pierce Brosnan, elegant, James Mason, swellegant, Tyrone Power, all pretty boys, ever single one. All born under the passive nature boy archetype. And no wonder: The archetype of Adonis was such the fleur that he turned Venus, Aphrodite herself, into the aggressor and that never happens. I pissed off her boyfriend Ares, to no end. Well, yes an end—he killed Adonis.

And what about the female Taurus who draws on the archetype of the nymphs. Well the weird thing is, Taurus ruling the ages of 7-14, that many young girl stars, Hollywood nymphets, have been born under the sign of Taurus, making their mark on the masses early in life, not always between the ages of 7-14, but sometimes, and sometimes even earlier: Shirley Temple, Kristen Dunst, Valerie Bertinelli, Sandra Dee, Ann-Margret, Janet Jackson, Amber Tamblyn, Lena Dunham, Sophia Copolla, Audrey Hepburn, Cher, Barbara Streisand, Lily Cole, Adele, Yvonne Craig, Kelly Clarkson, Tracey Gold, Tina Yothers, Danielle Fishl, Eve Plumb, who is one of those people whose names fit their archetypes. I’ll explain:

The most famous of all the myth’s nymphs is probably Io whom king of the gods, Zeus, turned into a snow-white heifer to hide when he was caught messing around with her by his wife , the “cow-eyed” Hera, queen of the gods (to whom Io was a priestess no less!) who, being no dummy, was like oh, is she a gift for me, thanks I’ll take her, and then, when Io escaped, Hera sent a stingy gadfly after her that chased her ass all the way to Asia Minor across her namesake Ionian sea. In fairy tale this story comes down to us as Snow White who was similarly persecuted by the scary beautiful queen. Even that scene where she turns into a crone to give her a poison apple, that is lifted directly from mythological stories of Hera who likewise disguised herself and offered up her “magic” apples which grew in Hiera or Eire or Ireland, that emerald green isle, the color of the sign of Taurus. Fun facts. The movie is basically a retelling of the same myth where Eve is trying to assume the role, on stage and in life, of the queen of drama, Margo Channing. Ann Baxter, of course, is that insidious Taurus sycophant. And really, what are all these stories about? Io is the maiden form of cow-eyed Hera; just as Eve is Margo Channing, who probably did the same exact thing to get where she is just as, at the end of the film, Eve is now cast in the role of Queen, finding a new nymphet, Barbara Bates, is coming to steal her fire. Hera is trying to teach her younger self Io a lesson. Snow White’s Queen is trying to do likewise. Bette Davis just wants to find her key light and avoid wearing a bra. She’s an Aries (in life) after all. These older women have learned the hard way that playing the innocent nymphet will only lead to some kind of personal fall. That’s why she is named Eve. The biblical Eve is Io as well, living in her garden in a state of ignorant bliss until some snake in the grass puts the bite on her.

Compare And Contrast (Part One)

Same As It Ever Was