The Symbol for 27° Virgo, which coincided with our final night of Afterglow Festival shows on Sunday evening, is A Group Of Aristocratic Ladies Meet Ceremonially At A Court’s Function. Fittingly, the Sunday night program was made up of three great ladies and their roles, as women, females, was the thread that ran through it.

First Nora Burns’ piece David’s Friend explored her role as best friend and “fag hag” to someone she loved who died of AIDS at the age of 31. Roles, in so far as they relate to formality, was the keynote here. For she lamented the fact that, though she is mother and partner, that she can never be best friend again. It was a very moving piece and, despite the fact that Nora claims she has no spirituality, quite soulful and there were two sets of undry astrologists eyes in the audience I can tell you that. Nora’s journey parallels our own in many ways, coming of age in Boston and moving to New York at a time when the crescendo of disco cum punk club scene was crashing into AIDS crisis. It was a tough one but beautifully done.

Next, Fauxnique performed The F Word, being that of feminist and she explored this role from a fresh perspective via spoken word and song and her signature interpretative dance suffused form of the best drag on the planet. A real woman, whose real mother was something of a drag mother, Fauxnique owns the role of drag queen just as she owns the role of feminist, there being no mutual exclusion in the mix. And it’s a visual feast because she changes clothes and wigs and looks so fast before your eyes it would be dizzying but for the fact she keeps it real and unslick and speaks to her transformation, typically as she is making it. 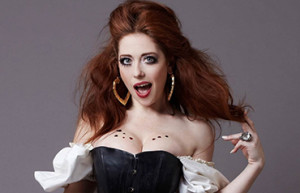 And then there was Bridget Barkan whose show, Songs For Recovery served as finale to the festival. Emphasis on the word: served. The pipes on this young woman are astounding…is astounding? Whatever. It was such a great show in which she explored the role of woman who loves to much in a fresh, unique way. In her case she is actually recovering from the role she’s played as a member of the female persuasion in the face of gender counterparts. Performance art meets pop divadom. So powerful. And, ironically there was a row of drunken women—in the front row. They wouldn’t shut up. Especially the most incoherent one on the end. I tried to reason. That only made them louder. Ultimately Bridget paused and schooled them from the stage with a compassionate appeal to their better natures and it sort of worked. Well, long enough to get through the show anyway.

Taken together there was something truly archetypal about the evening. Indeed, something ceremonial in their exploration of their assigned, assumed, assuaged and aspirational roles. They played their parts and they did so exceedingly well. This symbol is ruled by Sagittarius in a twelve-fold sequence, a sign governed by Jupiter. The female archetype of Jupiter is his sister-wife Juno, goddess of women and knowledge and power.