This is getting a bit weird. The symbol that coincided with Saturday’s show at Afterglow, which was just one, Michael Cavadias with Sam Kogon in The 802 Project, is A Boy With A Censer Serves The Priest Near The Altar, which is at 26° Virgo and ruled by Scorpio in a twelve-fold sequence. And, not to make shed too much light on the difference between Michael and Sam’s ages, this is archetypally not far off because Michael is something of a veteran or, as I called him, a refugee from glam-rock stages of places like Don Hill’s Squeezebox and those of us d’un certain age know Sam because of Michael’s inclusion of and colloboration with him. So maybe it’s not a censer but an electric guitar but still Michael does seem to be showing Sam the way in this crazy world of performance which once was one and the same with spiritual ritual.

This image portrays the archetypal relationship of adept and apprentice, the great being who plays planetary protector being served by the young page. The stage is a sacred space make no mistake. And it is indeed the altar upon which we sacrifice our artistic delusions along with our fears of failure, both extremes of which can undo the artist-priest/ess. And sometimes we need a little help. Because it can be pretty darned scary out there. As Elaine Stritch would say (referring to her alcoholic beverage in this case) “I’m not going out there alone!” Or something to that affect. And Michael, too, like those on Friday, was breaking out with something new. 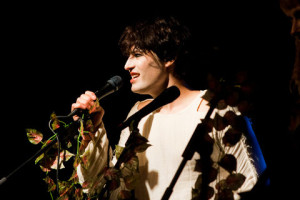 He’s always been a great singer in a raw, sliding punk-glam-rock style; and he’s one of my favorite singers on the planet because there is risk and chance and a bit of danger in his voiceful performance. But the Afterglow Festival must have a narrative and I had wanted Michael to create something in words for a long time now. And he has wanted to, too. And he did. And it was very good. It will enjoy some development no doubt. But the magical child has been born. The ritual, for which he needed his young apprentice, worked like, well a charm. And now I suspect Michael will be charming us with his words as well as his music for a long time to come! And just as this has been drawn out of Michael, Sam too, will have been e-ducated as well!