A Flag At Half-Mast In Front Of A Public Building is the symbol at Virgo 25°, which would be ruled by Libra in a twelve-fold sequence. Have you noticed, often, that when we get to a Libra-ruled symbol there is always some hints of the public and democracy? The keynote is: the social acknowledgment of a job well done and a destiny fulfilled. I’m a Libra. And what did I just say that people said to me the day after my first-ever night of singing and playing piano for other people in a complete state of guileless innocence and unselfconsciousness? I received social acknowledgment on a job well done and, yes, for the first time in my life I feel that I fulfilled something that feels like destiny, in so far as that word relates, etymologically and in every other way, to the word desire. I had a breakthrough and for the first time in my life it hadn’t resulted in an utter breakdown.

I often feel invisible. And as someone who has been an understudy or has written about other people (I wrote features on celebrities) or did pr for other people or even as the presenter and producer of other talent, I’ve always upstaged myself, deferring to others as more talented than myself. And the fact is that you can’t compare talents. It’s actualy impossible. We all have gifts and for some its easier to develop them; while for others there are innumerable blocks to doing so. Some of the best singers are unsung while we’ve had no lack of Bob Dylan’s warblings in our ear drums. Anyway enough about me.

Friday evening kicked off with the great Matt Ray in a show of his own: Welcome To Your Living Room. As someone who has played in people’s private residences, as hired talent, it was an interesting and intimate twist on that element of his career which includes accompanying great singers but more importantly his own solo artistry as a singer-songwriter. The notion, though, of entertaining in a private setting is a more democratic experience of the artist, with whom you’re on a level playing field, as opposed to being separated by a stage and a sheet of bright lighting. The Sabian Symbol of the day, though, does deal with an individual getting his due and the recognition he deserves and, in having his own show at the Afterglow Festival, Matt at once came off his perch as Musical Director, while jumped up to perform as a great solo artist in his own right. 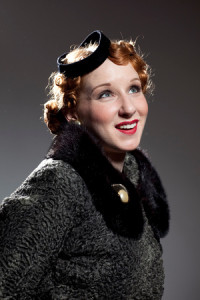 Friday night also included Molly Pope whose Polly The Mope show also touched on this theme in its advent if not in its content, per se. You see this show signaled something of a departure for Molly who has often nodded to her vintage alto belt by appearing in a beehive hairdo with a cinched-waist dress, contextualizing herself in the tradition of, say, an Ethel Merman. Well not this time. She was paired down, an urchin of sorts, a Clara Bow with a pointy cupie pout and marcel wave, in a shift dress reminiscent of the girl in Chaplin’s Little Tramp or Audrey Hepburn’s bookseller smock in Funny Face. This was more Molly than we’ve seen and thus she allowed for the public recognition in the equation, wowing us with a beautiful array of songs which tapped that belt to varying degrees.

Then another show happened, Morgan Bassichis performed When The Baba Yaga Eats You Alive and this too was something of a public recognition. For, Morgan happened upon the Afterglow Festival a couple of years ago. Actually, I was barking (mad?) in a top hat and said “come see our shows.” They were a bit rich for his blood so I invited him to just come and be inspired—he had newly thought about performing and had begun to write. Well he made friends with many festival folk and moved to New York et voila, two years on, he had his own funny stand-up cum performance piece at Afterglow to which his parents and family friend came. So I think the recognition was private as well as public!