After the lion of the previous image now we get Mary And Her Little Lamb, the symbol for Virgo 24°. I think for the first time ever have I ever equated this with Mary and Jesus. Am I the only one who’d never thought of this? Virgin mother with lamb of God? I’m a bit slow I suppose. But then again so are you. The point of this image is to stay simple and pure in the face of any and all tests. This symbol is ruled by the sign of Virgo in a twelve-fold sequence, thus it is doubly Virgo. Not only do we have the virgin here but also the pure innocent lamb whose fleece was white as snow. We are here to turn the other cheek, taking a non violent approach to all things and being like little children.

Funnily enough the three shows presented on Thursday at Afterglow shared a certain purity and innocence.

Rachelle Garniez played a number of instruments displaying a pure talent devoid of any bells and whistles. It was the most impressionistic of the festival pieces entitled Songs, Streams, NYC Dreams, and we did enter a sort of dreamscape with her where glimpses were illumined and senses magnified. There is nothing jaded or sophisticated (in the truest sense of that word) about Rachelle’s performance. It speaks in almost a pre-language and exhibits a sort of compassion for the lost innocents of the world. Rachelle seems as serene a character as the lady in the image despite sufferings and sacrifices.

Next came another pure talent, Dane Terry, who, like Rachelle, seems to have retained an untainted spirit despite more hellish aspects of the human journey. Both seem to have not failed their tests of human understanding. In Dane’s case we see this youthful, mercurial character perched atop a piano bench, which he never leaves and yet there is no lack of dynamism. He tells a story of a youth, in Anytime Moe, encountering a series of vivid characters, which he delineates in voice and expression. The youth may falter but remains internally snow white, ultimately emerging with his faith and inspiration intact. There is something golly-gee willakers even about Dane’s descents into darkness. 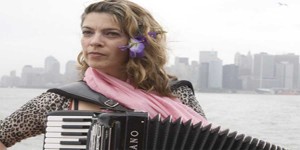 The night was capped off by Brian King and his merry band What Time Is It, Mr. Fox? Even in the title of his piece, Lullabies for Heratics, we note the juxtaposition of innocence and radicalism. The theme of the show was one’s relationship to spirituality and the shaming that can stem from not adhering to dogma and the inate transcendence, via our innocence and ignorance of all such associated guilt. It also just plain rocked as did all our shows; but with a full band on stage, there was a sense of solidarity behind the notions being floated out into the witchy ether filled with song and soulful redemptive power.

After the shows, our friend John Dowd threw a party. I stayed until 4am, the last two hours of which playing piano and singing by myself in the music room, seranading, it would seem, other more usual night owls in the other room. In a state of complete sensual exhaustion, by this point, the scaffolding of my analytical mind was utterly dismantled and I played and sung with not an iota of inhibition, returning to what might be a natural innocent state of creation all my own before the voices in my head (my erstwhile older sister’s in particular) told me I was terrible and set others teeth on edge. I thought I imagined how good I might have been and yet I still offered apologies to my host and fellow guests if I was “bothering them” from the music room. However the next day I learned that my seeming flow state wasn’t my imagination. I received thank yous and praise for my guileless performance. I truly had been in the zone it seemed. I hope that means I can stay there more and stop the violence and tyrrany of self that comes from low self-esteem on the subject of my own talents. In truth, those hours at the piano were a sort of spiritual experience, an ecstacy, a rapture, more so through than of me.