A Lion Tamer Displays His Skill And Character is the oracle at Virgo 23°. Of course it’s ruled by Leo the Lion in a twelve-fold sequence. Crazy (good) how that happens. This oracle is about needing to tame or more vital (or beastly?) energy in order to fullfill our destiny. Well I didn’t do such a great job myself with this one on the Wednesday of Afterglow week. Already living on fumes and no sleep I got a bit wild, letting my hair (mane?) down, and shook, rattled and rolled my way through that night which was a second full evening of wonderful shows. And then I hosted a midnight party during which I fairly soon fell asleep. I commented on there being nothing more chic than hosting a party and then disappearing into slumber. But the truth of the matter is I passed out from fatigue and a bit too much wine and song.

The evening began with Carol Lipnik’s The Séance which was wonderfully witchy and really channeled some real primal energies. That’s the trick. We don’t want to squelch the naturally wild energies within and without us, we want to harnass them, while we become an open channel for them. Talent, like a certain mediumship, is something that must move through you. And I felt that was happening in spades with this great show. 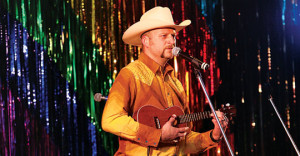 Next, Larry Krone, a gentle giant of a cowboy, took to the stage with his show Me Loving You and it was probably the most intimate and personal offering of the festival in a way. I think of cowboys as living in the wild, taming creatures right and left, and yet they posses this quiet, polite demeanor that is sweet and deferential. Larry embodies this. Despite displaying his musical talents he also changed couture creations of his own designing during the show, an element of performance that would be echoed later in the week. Tame, in this case, was a classy boon.

And then there was Martha Graham Cracker who let her lion roam free. And though it was feriocious, coming dangerously close here and there, it still managed to be reined in by pure technique. Still this was a full attack, both vocally and in terms of movement and dance. MGC was a member of that core from whom her namesake character derives. And her energy is boundless, nearly savage, whilst she retains a sort of street-smart noble air. She recalls a Kathleen Turner at most maniacally comical, teetering on the edge of lucidity. And with pipes for days. She roars. Oh and her show was entitled Lashed But Not Leashed.

The legacy, the legacy