Crown and Anchor Me

We must once again stop to consider that the Sabian Symbols were divined in no particular order. Astrologer Marc Edmund Jones held up blank cards, that had been numbered 1-360 on the back, and then shuffled. He then held these cards up, blank side, to the quite blind (in any case) seer (goota love that) Elsie Wheeler who then verbally divined each oracle. Thus, the fact that these symbols follow an astrological logic in what I perceive to be a twelve-fold sequence of the Zodiac signs, in rulership, is extraordinary. Really. Case in point: The oracle at 15° Virgo, ruled by Sagittarius, is A Fine Lace Handkerchief, Heirloom From Valorous Ancestors, while the previous symbol was An Aristocratic Family Tree, which was all about root strength. Well today, that root strength has produced beautiful flowers, that which the handkerchief, with it’s own lacy folds, portrays. We’re told that ‘”the neophyte who acts with determination, courage and discrimination while following “in the footsteps” of his predecessors receives a symbolic prize from the Brotherhood ready to welcome him when he has fully proven himself on the battlefield where he meets his past [hello Baghavad Gita] which tries to block his way. The mystic Beloved hands him what she has woven for him out of spiritual threads [hello The Odyssey].

There is a lot going on here.

First of all, as you may glean from the Sagittarius male chapter of Sextrology by Starsky + Cox, this ninth sign of the Zodiac is all about brotherhood and patrilineal acceptance and validation (just as its axis sign of Gemini is about boon companionship and brotherhood of a more immediate form). In Sagittarius we aren’t just dealing with a rat pack, we are talking serious initiation into brotherhoods that date back, being rooted, via the Scorpion energy that precedes this flowering of mystic manhood. The body part ruled by Sagittarius is the thigh. Dionysus is born from father Zeus/Jupiter’s thigh. Planet Jupiter rules the sign of Sagittarius as much by accident as the order of these symbols is accidental (or as coincidentally as ones life unfolds very much in keeping with ones astrological birth chart—but that thought is for another day). True patrilineage or that born out by brotherhood rituals are an expression of today’s oracle. And just last night, Stella and I were strolling through Boston’s Back Bay, happening up a fraternity pledge party about to begin and on the way back, passing the venerable building in which that fraternity is housed, seeing into the window, a vast oval room with shelves filled with leather bound books, all exactly the same, brown with black spines, each spine of which had a white piece of paper bound to it, held in place by, I think, rubber bands. It held the annals, no doubt, of this brotherhood, and it dated back centuries, to be sure. Validation from Valorous Ancestors indeed. 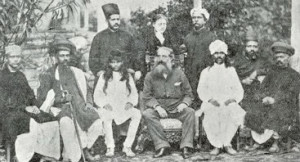 Now, honestly, these aren’t my brand of Brotherhood. But I do believe that I descend from a long line of another sort—that of the metaphysician of not mystic. And part of my vision of late, without getting too into it (although I did allude to it some months ago) is not to find but rather to be found, given validation, by some actual or loosely construed tradition of said ilk. It’s something I see happening, but something I know will elude me if I seek it. One cannot pledge to the type of Brotherhood I perceive myself a part of. It will or will not be revealed. I’ve had glimpses. But one must continue to mine, at the root level, ones own experience and continue the crystalization of ones own character and delve the depths of ones own psychology in order for there to be some flowering token of validation, as in the form of said lace handkerchief. And one cannot make such tribute the goal. The only goal of the root is to extract nutrient—the nature of the flowering depends upon it. The Penelope will reward The Odysseus when his journey is complete, meanwhile all the inherent battles are most assuredly within. On the esoteric level, where this oracle also, if not mainly “lives” Rudhyar has this to say:

‘”…the true “disciple” is the blossom that crowns a long series of incarnations.”