In The Zoo, Children Are Brought Face To Face With An Orang-Utang is a Capricorn ruled at 16° Virgo and it portrays “a direct confrontation with the wild power of primordial nature within oneself.” I think this is someting Capricorn’s understand best. Look, their symbol is a goat, Baal, the beast, ultimately in the Judeo-Christian line of belief. The scapegoat concept comes from isolating the sin (within) and casting it out, on the back of that beast of spiritual burden. Mel Gibson, Richard Nixon, Jim Bakker, Phil Spector (the list goes on and on) are all Capricorns who rose quite high in their (mountain ascent) and went a tumbling down, Jack, breaking their crowns. It’s a cautionary tale about being well anchored if you’re going to wear some golden corona.

In this symbol innocence (children) confront their primordial savage beast. This is the Capricorn dialectic. J.D. Salinger built a thematic career on jaded male characters who couldn’t justify the beastly realities of the world with the inherent innocence of a child. It drove Seymour Glass to suicide and Holden Caulfield to a brand of madness, because he couldn’t catch all those innocents before they fell. Just as we can’t stop the school children in this oracle from recognizing themselves in the orang-utang. We are witnessing education, which, as Miss Jean Brodie was won’t to express is a “leading out” into the world of transcendent activity, not a “putting in.” All inner primal energies need to be objectively faced. Funny that in certain occult traditions, apes are seen as evolutionary “throwbacks”, beings who were once divinely human but slipped back into a savage state. In our book Sextrology we speak of Capricorn man as a “throwback” to a former time, being ruled by Saturn, the planetary namesake of the golden-age god who was deposed, uncrowned. 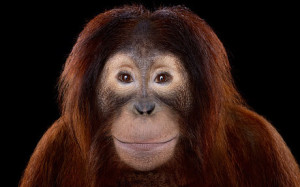 And so we return to original sin—modern school children, being future orientated, being confronted with an incarnation of that cautionary tale—the degeneration of vitalistic power that was once available to wee (who aren’t really) mere mortals. As we rise our chances of falling harder become greater. We know that adage since childhood. Capricorn is the energy of ascent—whether it be Moses or Martin Luther King we are drawn to the mountain, a symbol of pinacle spiritual height available to flesh-and-blood humans. Saturn/Cronus’s mate is Ops/Rhea. While Saturn has fallen, she retains her power, stationed at the top of Mt. Idea, wearing her turretted crown. As we ascend we must face those beasts of the pit—it’s how Gandalf goes from Grey to White, just like Moses’ hair. We must, in a sense, release the beast and confront it. Jesus has that little meeting with the devil before he goes on to fulfill his divine destiny. We all do. Everyday, folks, everyday. It’s just something of which the Capricorn of our species know a little bit more about. They are in constant confrontation and ascent thereby.

Crown and Anchor Me