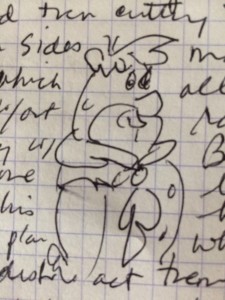 As people are drawn to the Light and want to see and play with him, this makes the sister darkness so, so angry; especially, when the adoring pilgrims are her peers, other six-, seven-, eight-, nine-, ten, eleven-year old girls. I can speak now but what to say that won’t land me in more terrible trouble? I need a new role to play. I must drive my true, eternal character of Light ever inward pretending to bid it fast farewell and learn to play another more temporal role.

Enter the Performer, the first main gig of which was playing the character of juvenile vaudevillian. Make ’em laugh, make ’em laugh. In the late sixties and early seventies, genuine vaudevillians were in their own sixties seventies and eighties. Ed Sullivan was still on television, both presenting and preserving these acts intact. Variety shows were all the rage , as were holiday specials in that form. Laugh-In. The Smothers Brothers. Andy Williams. Bing Crosby. Bob Hope. They all played host to exciting new artists and stage-and-screen veterans alike. There were three major television networks. And the same pantheon of fading entertainment gods being suffled around by night in living color appeared by day, on the weekends, in old, younger black-and-white versions of themselves in edited movies from the thirties, forties and fifties; and the jevenile Vaudevillian would match the fresh newsprint faces with the leather, bloated colored ones in pastel polyesther suits and tuxes, and fuscia, lime and lemon gowns positioned against sparkling midnight blue and azure and gold and burgundy curtains or cutaway geometric cardboard set pieces, most typically in some sanitized take on a flower-power theme. One’s eyes were glued, no other options.

And as if that wasn’t enough: there were the impersonators, particularly those who performed on a syndicated show called The Copy Cats where the real aging stars were made into even more caricature than they already made of themselves. This was my in. I could imitate the imitators. And if my performance of the material wasn’t funny enough in its own right I could get laughs and attention, anyway, for the mere fact that I was a four-year-old attempting it. James Cagney. Jack Benny. Carol Channing. Richard Nixon. Liberace. Humphrey Bogart. Mae West. Groucho Marx. I would doo them all which secured smiling moments from an otherwise absent or maniacally raging sire. It was, like most things, lost on my mother who was still having an unspoken relationship with my previous Light incarnation, dressing him up—in navy or forest green or maroon one-piece jumpsuits, overall rompers that buttoned at the shoulder, over button-down shirts with Peter Pan collars in respectively pale shades of baby blue, mint green and let’s not call it pink; oh, with matching hat of navy, forest or maroon on some equestrian theme, with an under chinstrap that snaped closed at the ear like a jockey’s—to take him, after soft boiled eggs or a Carnation Instant Breakfast, to the post office, supermarket, bank, dress shop, shoe store, drug store, with its soda fountain (for a vanilla egg cream) and endless hours in the beauty parlor with fat, elderly ladies under giant dryers to be coiffed with giant headresses made of their own teased, sprayed hair. I would be oohed and ahhed over; but, for the most part, overt displays of affection were not shared between mother and Light. it was a cool casual affair of telepathic communication and easeful ritual agenda that ended, in any case, when, still at age four, he entered kindergarten where he played a now dual role. More on that a little later.

On weekends now, the only time he saw father who left for work, weekdays, before he awoke and returned well after his bedtime, he was the performer full stop, doing his impressions, patter between songs or carrols, depnding on the scenes, often tunes from his Disney movie compilation albums. Hi-Ho. Supercalifragilisticexpialadotious (which he could say backwards). Zip A Dee Do Dah. The Bare Necessities. Bibbity Boppity Boo. And he’d begun to free-style with his impressions adding Bugs Bunny, Daffy Duck, Elmer Fudd, Foghorn Leghorn and all the Warner Bros. cartoon characters to his repetoire. He learned they were all voiced by the same man, Mel Blanc, whom he also noticed was listed as the voice of Barney Rubble in the credits of The Flintstones which he watched along with Lost in Space and I Love Lucy religiously after school before dinner. He not only added Barney Rubble, which could mistaken for Yogi Bear, to the act, but he began drawing all The Flintstones characters then cutting them out, coloring them on both sides, making his own version of paper dolls, allowing him a desired form of play without raising eyebrows or real wrath the way attempting to play with Barbies or other such figures might do; because waking the two beasts in his household was the absolute opposite of the plan which was: to evade, avoid and otherwise distract them.

It almost worked but there were unforseen downsides. For instance, he couldn’t have realized that Apollo was also the god of yet another abstract—talent—a word of worth and measure—a talent is a weight placed on one end of the scale to balance and measure what was on the other , so really very Libra Scales indeed. He wanted to lull the beats with a little razzle dazzle; he didn’t wish to anger the wicked sister by winning any praise from her preferred paternal parent who was finally finding a reason to brab about the vaudevillian cartoonist who had otherwise brought him nothing but shame and sadness.