Midway through Taurus, At 15°, Head Covered With A Rakish Silk Hat, Muffled Against The Cold, A Man Braves A Storm is the Sabian symbol du jour on which to meditate. The word rakish immediately stands out. The tone of this oracle is a bit jaunty, if not somewhat disreputable. The man seems to be a self starter; it is likely that he has braved a storm before. He may be somewhere in the middle on the social spectrum; the prevailing wind isn’t at his back; it might be more of a struggle than he knows, or will even admit. He is braving the storm. He hasn’t accepted a lower lot in life like the porter, but his success isn’t assured. He portrays either naive bravado or great character in heading into the storm. Perhaps the storm is raging inside him and will empower him. This oracle is ruled by Sagittarius in a twelve-fold sequence. The sign is ruled by Jupiter, named for the chief god of thunder and lightning, that may strike, with genius, like wild fire—Sagittarius is the unpredictable mutable-fire sign that inspires the higher mind.

Sagittarius connects the subconscious with the conscious into a stream of consciousness that has often characterized genius expression. The sign is known to breed risk-taking. And this man, with his rakish mindset, shows devil-may-care, daring. He is fueled by outsized confidence which may be more than a match for social heirarchies. He’s a man on the move, and his confidence comes from within, not from outside acceptance or validation. Here, the individual is taking transition into his own hands, moving himself to the next level of human consciousness, social standing and probably both. He is drawing not on privilege but on experience. He’s been there and done that. He possesses street smarts but he’s building upon them; he’s not going to stay where he is, he’s going places. I think of Frank Sinatra, a Sagittarius, or anyone who comes from the city streets but is blessed with high intelligence and talent and he’s determined to put all the pieces together, no denying where he’s coming from, and unapologetic in his desire for success.

When the going gets tough…etc. And some of us know this dynamic well. I’m this man. I come from financially poor beginnings, and my father, who had countless shortcomings, was also this man, and he took us as far into the storm as he could, typically sporting a dapper hat, with a feather, a symbol of higher-mind aspirations. He had the benefit of being middle class when there was one, but still he worked for the man who tried and mostly succeeded to fuck him over in the end. The storm for him was that of social strata and prejudice. He died with nothing except for an uncompromising nature that never let him quit. I seemed to have inherited that. For me the storm is not working for the man. So braving it isn’t a just a necessity it’s a privilege. I welcome the wind and rain on my face. 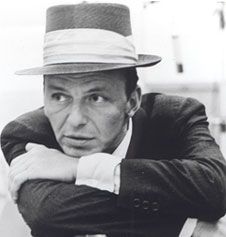 Then again I had a weird and wonderfully wacky Pisces mother who, again, when in her cups when I was small, insisted I accompany her outside for strolls during hurricanes.

There is something a bit cringy about the costume of the man with the hat. He seems to wear his station in life. He’s a big garish, perhaps, bordering on nouveau. That always makes me uncomfortable. Like Stella Dallas at a fancy estate; or the penchant some men have these days of adopting a sort of neo Oceans Eleven style when asked to dress up for weddings. Barf. I feel some pity for this man in the oracle just as I genuflect to his pluck. He is telegraphing his desire for upward mobility via trappings that might prevent him from it. Again I think of Frank Sinatra who, despite his success, being labelled a wop, as my father surely was, snubbed in the end by those Kennedys who, let’s face it, weren’t exactly bluebloods themselves. But I find prejudice is more prevalent the closer the social proximity between classes. It explains why Italian Americans can be the most prejudice of African Americans. It’s because they were the last immigrant wave before the Civil Rights Movement.

If the storm symbolizes an adverse social climate, I wonder what that means for me. Different things at different times perhaps. Surely there are enclaves closed to me. Although, a jaunty hat connoting a happily tweaked, optimistic mindset, I might not see those obstacles. Sagittarius’ motto, of course is, I see, and as the higher vibration of Gemini, it sees beyond duality, employing a third-eye (blind) tertiary perspective. Our man isn’t this or that. He isn’t his origins, nor is he the embodiment of his aspirations. He is somewhere at the point between, the mark ‘twain—Samuel Clemens is also Sagittarius. So we ask ourselves: Where we are we our transitional selves? Where are we the wo/man on the move? Where are we coming from and where are we going? Are we bravely facing any impeding elements or obstacles along the way? And how does that hone our character?