Of course today’s symbol is ruled by Cancer in a twelve-fold sequence. At Libra 16° we have this: After A Storm A Boat Landing Stands In Need Of Reconstruction. I don’t need to go into the cardinal-water sign of Cancer being associated with flood myths, right? You’ve heard me say it all before.

What we are dealing with here is the connection between human ego consciousness and the mast unconscious, the lower case self with that of archetypal energies. Connecting with these forces will certainly at first have a destructive effect. Boats symbolize the link, the ability to travel or connect, between these two levels of conscious being. In effect we open ourselves to certain “psychic storms”. I have described some of my own experience with this but it’s sort of a well worn theme: When you expose yourself to vaster realms of consciousness it will blow your mind, and there is a certain need for reconstruction as the psyche copes with this sort of rewiring.

Take Joan of Arc (who was actually a Capricorn, the higher septave of Cancer, but her name does link her to this boat imagery and the flood myths): People were like girl is cray cray. And I’m sure she struggled with fear of psychosis, before the term existed, wondering herself if she was completely mad and not actually making connection to the archetypal energies personified by two saints and an arch angel. But she flowed with it. It didn’t end well for her on the personal ego level. I mean, not at all. But a teenage girl suffused with higher archetypal power actually saved France from a conquering oppressor and pretty much single handedly drove them out. So you tell me if that was madness or divine connection. I’m going with the latter. 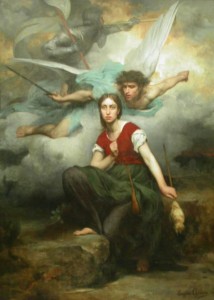 The boat landing then is the actual pathways, the wiring of our own minds, when confronted with these archetypal influences; but it’s also the cultural collective, the group consciousness that must some how get their brains around something like a Joan of Arc and make sense of what just happened here. The point is there is no sense to be made. There is only faith and belief or the opposite thereof. We are dealing with some heavy divine forces here. And, in my view, sheer madness could not have accomplished what that wee French girl did. And so it inspires faith in such forces. And her story can’t help but serve as a metaphor for the rest of us. Few of us will ever be so whalloped with divine intervention and lead an entire nation to freedom from oppression. That’s just not an every day occurance. But most of us are given a bad wrap. We are all, at some point in our history, labelled crazy or evil by some small set of oppressors who fear our power, writing it off as madness instead of some form of genius. Genius remember is etymologically linked with genie, a personification of supernatural influence that can be a sticky wicket leading to the old adage: be careful what you wish for.

So the theme of today’s oracle is repair, as it is for any (Cancerian) flood/storm-myth symbol. It’s the specific repair of our minds which can be shown as feeble in the face of emotional and spiritual breakthroughs. It needs to get itself around what’s happening. And in order to do that it must expand along new pathways. We can’t illuminate with powerful new enlightenment via the circuitry of old, frayed wiring. We need to get our grid together, making it strong enough to commune with these great and powerful forces. That is tantamount to evolution, I believe, not just of the species but of our planetary consciousness. There is a star man waiting in the sky, he’d like to come and see us but he thinks he’d blow our minds. So prepare ye the way!