The first thing that strikes me about the image at 25° Sagittarius, A Chubby Boy On A Hobby Horse, is how literally Centaur-like this is. We are also back to the first sign of Aries, in a twelve-fold sequence, claiming rulership of this oracle—Aries rules the first seven years of a person’s life. And that age-group perspective is central to this symbol in that it hinges on the anticipation of powers one can only as yet pretend to. The horse is a symbol of power and the sign of Sagittarius is archetypally associated with being at full power. It’s planetary governer is Jupiter named for the king god (Greek: Zeus) who was mighter than all the other gods put together—just as all the planets in the solar system could fit inside Jupiter the largest of them all—the female archetype being his sister-wife, June, (Greek: Hera) who is queen of heaven and goddess of both women and, you guessed it, of power. In bribing Paris during his eponymous Judgment as to which of the three goddesses—Athena, Aphrodite, Hera—were most beautiful, Hera promised Paris worldly power, which was her province to bestow. Celebrating the goddess at full power was the ritualized display of lady on horseback—the ride of Lady Godiva (or Goddess-Diva) commemorated Juno’s power of blinding radiance, putting out the eyes of the peeping Tom, and, think about it, she is the very embodiment of the Centauress. 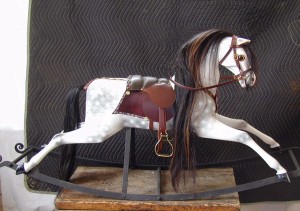 Horses are also symbols of sexual power and energy. The horse provided greater possiblity in terms of (saving) time and (expanding into) more space. The chubby boy rhythmically rocking back and forth on his horsey is also pretending to the sexuality that will some day be a powerful possession. All that stored fat will turn to fuel. The peeping Tom was actually Thomas Rhymer, his name an echoing of the rocking rhythm of the horse’s movement and that of sex. The boy maybe lost in the throes of his imagination, projecting himself into the future, when he might be riding a real horse (or lady or man for that matter.) Sagittarius is all about connecting the higher mind and imagination, symbolized by the human half of the centaur, with the wild organic nature of the body and its own dictates, symbolized by the horse. The rocking back and forth, physically, while the imagination wanders and alights on its wildest visions, is a manifestation of that electric connection taking place. Rock and roll, jazz, beat poetry, stream of conscious writing all fall under Sagittarius rule as human expression becomes one and the same with what are undercurrent energies, bipassing the too-conscious mind, and emanating more from a sort of super concious. In this way we might see that the chubby child is channeling, invoking, summoning, conjuring his future.