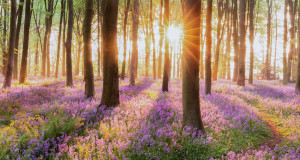 Hello All. It will turn Spring in the UK at 3:49 tomorrow morning, that’s 11:49 EST in the U.S. I don’t know if you know this but: I have been writing a daily blog for the past five years. It is called the Cosmic Blague (blague means joke in French) and it was originally intended as a catalyst for drawing out stories from my life, filled as it is with extraordinary synchronicities, so-called coincidences, indisputable divine intervention—and, yes, moments when I seem to have been the butt of the Universe’s joke—all such experience which  Kate Bush tunefully called the “strange phenomenon.” I began writing my Blague with the start of the new astrological year, on the Spring Equinox, 2015, a time when I was feeling more than a bit kicked to the curb by the Cosmos. I wanted a daily ritual of accomplishment and I wanted to tap my well of story-telling but I had a hard time starting. So I gave myself some specific inspiration:

In astrology, each of the twelve signs encompasses thirty degrees of the Zodiac adding up to 360 degrees of this cosmic circle, corresponding (close enough) to the 356/6 days of the year. Some time ago, an astrologer and a seer channeled what are called the Sabian Symbols to express the individual nature of each of the Zodiac’s 360 degrees. So, year one, I mused on these symbols, to inspire thoughts I could type down, not only on the symbols themselves but also as a trigger for the personal stories from my experience that I wanted to relate. That was year one. In the years between then and now the Blague took on many forms and expressed a number of purposes. Sometimes it inspired incredible creative flow. Other times it made me feel super locked up and I would find other ways to keep going, including using it as a personal journal, a platform for other writing I had to do—shows, book proposals, articles, branding concepts—or as a way to vent and even gossip about people, places and things, though disguised for the most part—sometimes I would accidentally name folks (woops, that wasn’t good, especially when I got called out). There were spates when it just got really deconstructed and a bit Dada, but I kept going. So here, nigh on the sixth year of daily writing—starting tomorrow—I have come up with another way to trick myself into being prolific enough: I’m going to start reading my Blague entries (which I’ve never done) five a day—If I read that many I will have read them all by the end of this next astrological year—and I’m going to cut and paste the best bits for each day’s entry, while writing new thoughts that stem from doing just that. Let’s call it taking inventory of my thoughts to date and “development” of any work that might warrant it.

I have a great deal of other writing on my plate this year and won’t have a lot of free time for my Blague (sometimes I would spend hours a day on this); and so if I get really in the weeds with other work, these simple cut and pastes can function as “re-runs” with a little introduction by yours truly. This has been a really worthwhile process for me and, in typical woo-woo fashion, I will say: I think that by keeping on writing as I have done, mainly, for myself, even though other writing gigs or deals mightn’t have been forthcoming, that I created a magnetic force field to attract other opportunities to me. Because, as I say, it is going to be a busy year. That said I have not promoted this Blague at all, hardly. At first I was posting my postings to a Facebook page, but I stopped doing that. I may again; who knows. Anyway, just letting you know what’s what and hopefully, as I distill the Blague this year to highlight what I perceive to be the “best of” what I’ve done in the past, it might warrant other readers beside myself!

Actually this was my first ever entry in 2015: And I think it might be of some interest:

The beginning is as good a place to start as anywhere. Better, I suppose. Like any first attempt at something there are bound to be mistakes and I will look back on this initial go at some point and cringe. But in just a few hours we will enter the sign of Aries, it being March 20, 2015. And my plan for this “astrological new year” is to explore the cosmic energy of each unfolding day from all different angles. I don’t know what those angles are exactly yet, but I have gut inklings and they’re fun to follow. I have a few notions in mind, as well, for ancillary stories and such that I will spew here. In fact it’s those notions that inspired the title COSMIC BLAGUE which, I needn’t tell you, is a play on words; as blague means joke in French and is also pronounced blog, so, well, you get it. I’m especially out to explore the notion of synchronicity this year, too, as it relates, for better or for worse, to the universe “acting funny”. When we feel we are the butt of some cosmic joke, or when we miraculously experience synchronicity, in both cases the Universe seems to have an intelligence and a desire, even, to communicate with us. And I’ve found the more you get into that concept, the more it does try to tell you something, one way or another. So I thought I’d share some of my experiences with what I’ve come to perceive as a droll if not an hysterical cosmos. The “Strange Phenomenon” that Leo goddess Kate Bush sings about, no mere coincidence; there’s that. And then we’ve those times when we feel we’ve actually conjured things into being, which isn’t so much synchronicity, but rather, perhaps, the working of magic along these same channels or celestial avenues that sometimes “coincidentally” lead to our door. So I’ll get into all that happenstance, but I’ll stay on track, mainly, by delving into the energy of each day of the year slash degree of the celestial circle as we journey, once again, through the zodiac.

Most of you likely know me as one-half of Starsky + Cox, authors, among other things, of Sextrology which is a popular “sexy astrology” book I wrote with Stella Starsky. If you’ve read it you might agree that it’s deceptively smart and sometimes pretty funny. The sex in Sextrology primarily refers to gender, not the act itself—our premise being that men and women of the same sign actually embody different sets of archetypes that speak volumes on their personality, emotionality, sexuality and gender- and sexual-identity. The most recognizable archetypes are the classic gods and, being that our zodiac is a western one, these gods veritably live within that mandala. The gods are gorgeous personifications of energy. We too are personifications of energy. And we maintain that people born under a certain sun sign embody a different recipe of cosmic energy than others born under another sign—generally speaking, breaking the entire population into twelve groups, or twenty-four, in sextrological terms. But let’s put people aside for a moment (although they are the most vivid representation of cosmic energy available to us): If there is a blanket energy associated with each zodiacal month of the year that manifests through all life and experience, then it follows that there are more niche cosmic energies specifically linked to each day of the astrological year. I suppose that was the 1990s pop-premise of that doorstop Birthday Book, from which we all got a giggle, glib as it was. But I know there’s more to each unfolding lotus of a day than the empirical notion that Marcello Mastrianni, Bridget Bardot, Dita von Teese and, ahem, yours truly were all born on “The Day of the Heartbreaker”; although a look at that list would certainly substantiate the notion beyond a shadow of a doubt. That was sarcasm in case you missed it, Sheldon.

So, as we start another trip around the wheel, beginning in just a few hours, I want to plunge below the surface of the observable and see if we can’t more profoundly delve each daily turn, turn, turn. I get the fact that, to everything, there is a season; but perhaps there are more specific purposes to each and every day. To be cosmically aligned with more subtle energies, those that, when grouped together in a monthly clump might be recognized as this month or that spent in one astrological sign or another, during which time, taken together, experience has the flavor of that sign, as do those born during it, might very well be possible. For the zodiac isn’t frivolous in my imagination, neither in depth or in degree. Depth-wise, it is a symbolically rich system encoded with myth and mystery—in terms of degree, each day of the year could have a sacred significance. And sure, if people (again the best living symbols we have) born on a given day point to what that significance might be, their collective roles and tendencies are worth considering. I will surely be exploring the Sabian Symbols—more on those later—which have long fascinated me and, I suspect, will help open a doorway onto what the larger point is of, well, each point on our 360-degree circle of 365-6 days. Astrologers examine the significance of the signs of the zodiac all the time, a month at a time. But getting down to the nitty gritty of the daily grind of the cosmic wheel? Beyond the light entertainment of daily horoscopes, it’s not really done. So I want to get into it. My sense is that I will feel more aligned with the cosmic clock and better understand what makes it tick, tick, tick. If nothing else, I’m sure I’ll learn something along the day and, perhaps, stay that much more in the moment or, at least, the day.

To view the original Sabian Symbol themed 2015 Cosmic Blague corresponding to this day: Flashback! The degree pointof the Sabian Symbol may at times be one degree higher than the one listed here. The Blague portrays the starting degree of for this day ( 0°,  for instance), as I typically post in the morning, while the Sabian number corresponds to the end point (1°) of that same 0°-1° period. There are 360  degrees spread over 365/6 days per year—so they nearly, but not exactly, correlate.

Typos happen. I don’t have a proofreader. And I like to just write, post and go!
Copyright 2020 Wheel Atelier Inc. All Rights Reserved.
Get your HAUTE ASTROLOGY 2020 Weekly Horoscope ebooks by Starsky + Cox