A Nature Spirit Dancing In The Iridescent Mist Of A Waterfall is the suprising symbol of 26° Capricorn. That said, the figure of the Fairy Queen, echoed in Shakespeare’s Titania, is one and the same as the Titan queen of the gods, Rhea-Cronos, the classic archetype of the Capricorn female. And it’s not the first nature spirit we’ve encountered in the Sabian Symbols. This oracle is hinged on the ability to perceive the hidden and creative spirit of natural phenomena. It is ruled by Scorpio in a twelve-fold sequence; and that sign is concerned with the hidden, invisible, what lies beneath the surface of consciousness and conscious reality. And here we are dealing with the revelation of the spiritual or pyschic forces related to the element of water—Scorpio is the fixed-water sign. Water signifies the constant flow of vital energies and the fluidity of consciousness, which is ever changing and, if we are following these symbols, growing and ascending. Both Capricorn and Scorpio are feminine signs and power signs to boot. We are wont to personify nature as female; she is the soul of the world, the anima mundi. 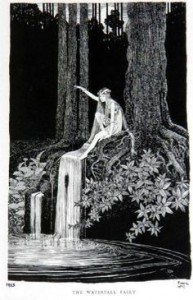 In scientific terms, we are speaking about the Telluric currents which are electrical currents that move underground and under the sea. The currents are a very low frequency and travel quite near the surface of the Earth, in its crust and mantle. They are geomagnetically induced from the interplay of solar wind and magnetosphere. Basically we’re talking about how we measure the Earth’s conductivity. I’m paraphrasing from Wikipedia—it’s not like I have this knowledge in my head—where is also found a list of literature and other media that use Telluric currents as a theme, mostly for science fiction and fantasy. In prospecting, the currents frequency is measured and used as a means for finding the best places to mine. Scorpio, fixed-water, is likened to ice, crystals, gems, ore and thus all minerals. I just saw this fascinating Nova on PBS last evening about the relationship between rocks and life; and how rocks actually created life and life in turn borrowed back from the mineral world, to create bones and teeth and so forth. Never will I look at a rock the same again. But I digress. How unlike me. Ha.

We are dealing here with occult energy; and, mind you, occult simply means hidden. As someone who does have a certain sensitivity in this area, I will say that it can sometimes be a mixed bag. I think the same personality who is psychically sensitive is also fairly susceptible to other influences and substances as well. Like the Celtic witches before me, psychic ability seems to go hand in hand with the tendency to be overserved at the bar. I’m not saying this would be true for everybody, but I surely notice it within my own gene pool. Through my work I have developed my talent in perceiving energies, personifiable or not. And surely as a child I witnessed the appearance of certain supernatural beings; but I don’t find this weird or shocking and neither should you. The same Nature that can self-create as millions of life forms on one tiny planet surely has the animating power to be perceived as an entity in her own right, at least to those who are open enough to witness such emanation. Fairies, gnomes, little people, what have you. They can be as real as the rock your standing on. And surely, in the spray of a waterfall, Nature herself might choose to make an appearance.