Aries 9°
(For last year’s meditation on the Sabian Symbol for this degree: click here 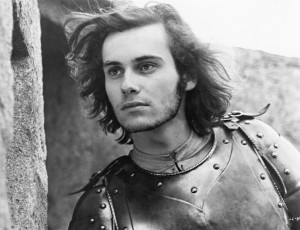 Aries is the sign of new beginnings. And it’s always helpful to think in those terms when we enter that sign each year. Questing is an energy that befits the warrior spirit of the sign. The brutal energy of the war god Mars, namesake of the sign’s planet, is refined through the feminine aspect of Athena, into vigilant figures like the knights of medieval legend. Whereas Arthur is a (Leo) King, Lancelot du Lac is an Aries figure, emerging from the Lady of the Lake, as the sign of Aries emerges from the watery sign of Pisces, of which that lady is an archetype. The pure aggression of the war god is channeled through vigilance in to a purifying factory, the fire of being. Lancelot is single-minded, as we all might be in the roles we feel we are born to—Aries rules birth and, by extension, that which is our birth right. What, however, is Lancelot’s one fatal flaw? Libido. Lust. Love.

Mars rules the male libido and the animus—the so-called masculine—sex drive in women. The warring spirit and the sexual urge in men come from the same testicular source. Aggression is aggression and the analogous connection between love and war is age old. The “spear” of Aries is both the literal instrument of war and the little soldier standing at attention below the belt, something that can unfortunately be used as a weapon in war wherein soldiers would kill the the men with spears and rape the women. Seriously analogous. But this pure aggression and beastly nature can be channeled into something noble as we see in the abstemious character of Lancelot who forgoes all pleasure, remaining, holding vigil. He puts his entire self in service to the large good. Like Superman. In fact Lancelot du Lac exhibits superpowers in a medieval context—he is a godlike figure so long as he keeps channeling that Mars ruled energy and libido into noble pursuits of serving land and liege. The moment he falls for Guiniviere all is lost. The lust is not only his personal undoing but that of the entire civilization of Camelot. You might say you lose Camelot if you came alot. Ba-dum-bum. Sorry.