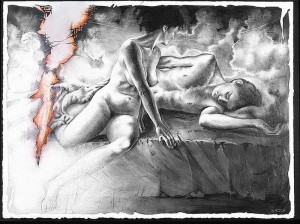 From a classical standpoint the first-born children of the gods are the archetypes of the first sign of Aries—both war gods, Ares and Athena (Roman: Mars and Minerva), these front-liners are two sides of the offensive/defensive warrior coin. Life being foremost a battle for it, we send these toughies forth.

The biblical archetypes are Adam and Lilith (the first wife of Adam) who was too like him—they battled for the top sexual position—and no compliant, though ultimately more dangerous, Eve. The symbol for Athena and Lilith is the same, a delta/triangle about a crossed staff. Athena despised her warlike brother Ares, familiarity in nature breed contempt, perhaps.

Anyway, all of these figures are alphas, as Aries people tend to be. Alphas being what they are, they tend to operate solo as a rule, not being the best team players on the planet. And like the first born gods they energetically draw upon, they approach life with a certain carte blanche. (White, along with red, is the Aries color. ) Full license, a blank slate. Think of Adam going around naming everything as if he was the only person on the planet. Ahem. Aries people (again, people of any sign are the most vivid example we have of that sign’s energy) tend to act this way. They don’t ask for permission, and rarely for forgiveness.

If you were the only person on the planet how would you act? Well I find that this time of year is a good time to contemplate that thought. Consider the indvidual shoots fighting their way through the soil, feeling the pain of being born—we are all of us, for the whole of our lives, like those bursts of life. Our attention needn’t be likewise undivided. We are the only ones. You are the only one. You are free of comparison. There is nobody with a better job, more famous friends, a more successful business, a more touted podcast, more hits on their websites, more likes on their posts. Life is hard enough to embody with singularity. And, as such, it can be the simplest of things.

Without compare, we can focus on what our singular purpose might be. Without consideration, we have license to “name” everything we see and encounter and experience. We can call a spade a spade. There is no competion. There is no contest. There is no race. (Insert double-ententre inference here). There is no rushing. There is no deadline to doing the one singular thing you were born to do: Become yourself. This is the true meaning of the sign of Aries’ rule over “birth” and “selfhood”. We must imagine what life would be like if we were the only one on the planet. What would we do then? Who would we be if there were no second opinions or outside influences? How would we dance if nobody were looking? Surely, we would embody our birthright. It would be second nature. There would be no clock ticking. We would simply be. The Aries motto is “I am”. We would go at our own pace. Again, life would be simple and though it mightn’t be always easy, there would be nobody stopping us from making it so, as best we might.