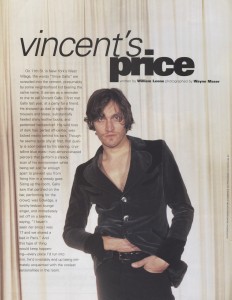 Today is Vincent Gallo’s birthday. It reminds me of a certain characteristic of, well, certainly men of the sign. The me me me factor. If you were to view the credits of one of Vincent’s movies, or to read the liner notes of one of his records, you will be struck by the fact that his name appears in all categories—produced by, directed by, written by, starring, artwork by, music by, playing all the instruments and so forth. I think of Warren Beatty and James Franco and the Aries men in my life for which everything is an exercise in the eponymous. On Vincent’s website you can hire him as an escort (for $50K) and even buy his sperm (for a million), the merchandise section of the site features a photo holding his crotch. Never mind the fact that he got a real blowjob in his film Brown Bunny from Chloe Sevigny whose, it is a miracle, career somehow managed to survive that. Personally I think Vincent’s site is hysterical and I think it’s yet another work of his art. The irony is there is no irony, but at least there is irony, which someone like, say, James Franco lacks. And in his film he’s the one giving the blowjob.

The selfie was made for Aries people like Franco who makes Ethan Hawke look like a shrinking violet when it comes to the proliferation of other works other than the one Hollywood is paying him to do. Aries men need for you to know that they are more than one dimensional because they feel so one dimensional, a symptom of being born under the one-way energy of objective, directive, centripetal Mars. They aren’t engineered to take much in, despite Franco’s phoney bj scene. They want to put it all out there—me, me, me—and they want you to think they are the best thing since sliced bread. The antlers of their symbol Ram’s head are the expression of specifically male ego. (That same shape can be read as the brow of Athena, the wise strategist, which is more in keeping with Aries female’s character).

I once had a “friend”, an Aries name Ari, I kid you not. He never stopped talking about himself. Ever. He was a painter and a good one. But he no longer paints which pisses me off since I bought paintings from him figuring, well, one thing is for sure: he will never give up because he fancies himself the greatest painter alive. He could talk for hours about one single brush stroke of his. It was maddening. But he grew good weed and it was the early 90s and I didn’t have anything else to do before working my waiter shift at the Bell Caffe down on Spring Street where my uniform often consisted of a micro mini Hawaiin print vintage bathing suit, work boots, and a slicker. We smoked pot there too while waiting on tables in a haze of post Nirvana grunge-punk post everything. Anyway, Ari never fucking shut up. Mainly, he was convinced, that he was a genius; and not just that but also some sort of enlightened being, a chosen one, a saint, a demigod. He was a bore, a word I came to truly understand because at times I thought he was drilling into my skull with a dull, blunt instrument; that’s how self-obsessed he was, but you suffer anything when you want that cushion of kush. I suppose I was just as self-obsessed as he was only you wouldn’t have known it.

Vincent had a similar personality in that he was self-obsessed; but he didn’t talk incessantly and he was also funny and self-deprecating and I believed his whole Johnny Unitas Republican act was real but exaggerated for effect. When he made Buffalo 66, a year when Unitas clashed with Joe Namath which was a watershed moment in Vincent’s young life, he had a screening in a large auditorium which was full. I remember Diane Von Furstenberg standing up and saying, I paraphrase, “Okay, Vincent, we are all here. Are you happy now?” then she sat down. I knew what she meant. She was telegraphing that he was doing what he was doing (making a film) solely for the attention, all eyes on him. And though I really liked that film, I knew she was right; and so did he. She’s a sharp cookie, that one. A cunning Capricorn in love with her privacy who married a monied man who owns practically everything most likely including loafers within which he is very light.

On the day I spent with Vincent interviewing him for the piece I wrote on him for Detour we really did have a lot of fun. He went to thrift shops and tried on the tiniest, tightest clothing. He had a model’s body, super lanky with zero body fat, wide shoulders, like hangers, and the narrowest waist and when he turned sideways he practically disappeared, but for that penis he was so proud of. Even before Chloe suckled it in Brown Bunny, our fashionable little war-god Vincent would tell stories about how a certain designer who won’t remain nameless—Valentino—once remarked, while standing next to him at a urinal, “wow it’s so big.” A version of that scene made it into Buffalo 66. Everything that Vincent talked about in life made it into his movies, songs or paintings. He has singular themes that he considers central to all of us. That’s so Aries. The symbol of his ruler Mars is that circle with an arrow, recalling the male genitalia; and Aries men lead with that in life, mostly unapologetically. Though often, they feel it makes them beastly, brutish or sub human; so they seek to transcend their physical nature which they fail to see as seamlessly connected to their spirituality—that mind body connection most of us strive to attain?—they have it naturally. But they pick at it. They mistake their singularity for that one-dimensionality. So they fancy themselves some kind of superhuman to find increased dimension. They might try to transcend the physical urges they have in spades. They might channel it into eponymous martial arts. They definitely have a thing for the East that goes beyond Marlon Brando’s taste in Asian women. They strive to have a philosophy and are naturally drawn to those that emphasize the Self. Buddha was an Aries. And how in keeping with his sign to show us how divinity is within not without you.

Waste Not Want Not (Mad Libs)