Sea Gulls Fly Around A Ship In Expectation Of Food is the Sabian Symbol at 16° Sagittarius which is ruled by Cancer in a twelve-fold sequence and, as we’ve seen with that premier water sign, associated with flood myths like that of Noah and his ark, the sea and ships often coincide with Cancer’s rulership, providing me personal validation for inferring this simple twelve-fold sequence. But there is more to this symbol than meets the eye. We are dealing with nature being made subservient to human dominion. 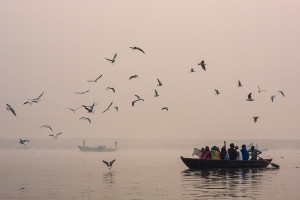 Just as those animals, two by two, were dependent upon Noah to shuttle them into a new delivered state of existence, the sea gulls in this image (and everywhere, because this is true enough) would rather be dependent upon what scraps the ship might cast overboard than pursue their natural process of hunting for food. We see here how man has a tendency to pervert nature, not just within our own species, but how our very existence alters the natural course and balance of things. The symbolism here is that the gulls represent normal, “wild” energies of the human soul, our psychic sensitivity, you might say; which all too easily attaches, and becomes dependent, upon external, social circumstances, if not corruptive social circles. If the sea represents the (collective) unconscious, then the byproduct of our human tampering, fishing around, within that realm can alter our instincts, making them dysfunctional and codependent. In other words, tampering with our psyches—or having them tampered with, may result in some form or other of trauma, compulsion or other such alteration in our natural state of mind and being.

We know the benefits of socialized limits, but we must also be aware of the social disease that stems from a system that doesn’t require self-reliance, even if it is a proponent for it. As strong as (our) nature is, it all too readily becomes subservient to the human collective trend toward domination of the planet and subjugation of the natural world.