Why, you may ask, is the symbol for Sagittarius 15°, coinciding with December 6, The Ground Hog Looking For Its Shadow On Ground-Hog Day, February 2, which would be ruled by Gemini, in a twelve-fold sequence. I don’t know. I’m sure it’s metaphorical. I doubt that Elsie Wheeler thought she was assigning this image to an Aquarian Sabian Symbol (February 2 falls in Aquarius). I can’t have all the answers, you know. I do know this (because I read about it): Today’s symbol is about “the value of anticipating new turns of events and ascertaining future prospects.

I know someone who today experienced a new turn of events. I suppose because she did it effects me too. But, otherwise, it’s just very Sagittarian, the archer, to project into the distance/future, while the shadow side of doing so would be called getting ahead of yourself. (I was pulled away and several hours passed) And now I’ve had my own sudden change of events, a redirect if you will, life all being in the editing. And I fully comprehend the reason dual Gemini rules this oracle. If we are projecting, with anticipation, into the future, basically there are two outcomes: the desired one (the ground hog doesn’t see his shadow and spring is nigh) or the other one(s). If we are waiting on a decision, ’twill either be the result we want—a Yes—which is specific, or a the other outcome—a No—but, as we tell clients all the time: no is yes. No is actually a wide open field of other possibilities; and we are thankful to the No because it tells us that our desired outcome was only half a connection. You see we want our desire (our part in the equation) to match our destiny (the universe’s part). 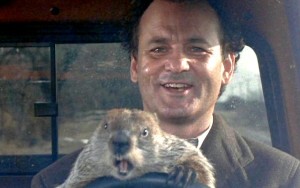 Sagittarius, whose motto is “I see” as well as “I understand”, being the so-called opposite sign of Gemini, sees beyond the duality of either or to tertiary outcomes that incorporate both sides of the equation. It is a third-eye vision that has some practical applications in life. As Stella and I say: “it is this or something better.” So we plan for all inevitabilities, in a sense, knowing that a closed door hastens us further down the corridor of life to our desired goal. It is what is called an “eonic” view that is to say we are thinking and planning beyond the immediate, “event consciousness” of Gemini whose shadow side always needs some buzz from happenstance, and taking a longer perspective, one of prospective, seeing what native Americans called “the long body”, thus eonic visioning. That’s the superpower of Sagittarian archers to see beyond the immediate and imagine any number of fields of experience that span time.

So if the ground hog sees its shadow we have another six weeks of what was the supposed undesired outcome? No. We are willing to imagine that field of time/space as being ripe with ultimate potential and opportunity. We, too, will “go back in” and focus more on interior work, knowing that there is more internal development to be had before we bust out into the world with our plans and projects. We are grateful for what might be a grace period for perfecting our visions, for crossing all our t’s and dotting all our i’s.

Incidentally, the groundhog was given the name “Punxsutawney Phil, Seer of Seers, Sage of Sages, Prognosticator of Prognosticators, and Weather Prophet Extraordinary.” Just remember, the weather within never changes!