Yesterday, with the widow image, we dealt with leftover vestiges of the past (karma) coming to light, being carried over, into a new era—both on the individual and universal levels. Today, at Sagittarius 14° we are confronted with The Great Pyramid And The Sphinx, which are also enigmatic vestiges of the past that have endured from a previous age, into our present, carrying with them mystery and meaning. They are ruled by the sign of Taurus which is strangely fitting. You see an “age” lasts about two thousand and some odd years—we roll backwards through the Zodiac due to what is called the precession of the equinoxes, so we are leaving the Piscean age and moving into the Aquarian. The Piscean age started around the time of Christ’s birth—the Jesus Fish. Before that was the age of Aries, the Ram, associated with Abraham who sacrificed a sheep in lieu of his son, Isaac. Before that was the age of Taurus, biblically associated with worship of the golden calf, and it was during the Taurean age, around 2560 B.C.E. the date when both the Great Pyramid and Sphinx were meant to have been built. 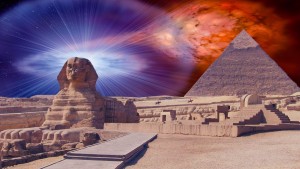 These structures serve as “quasi-divine Custodians” or “Seed-men” of a previous cycle of existence, harkening to a time of and belief in traditions “based on the perfect knowledge of the archetypal principles and forms which underlie all manifestations of life on this Earth (and by extension…the cosmos)” which, and you know I believe this, are still deeply rooted in our consciousnesses. We have unwitting archetypal knowledge which still forms a foundation upon which we can build solid and valid formulations—what we call “discovery” most times is really uncovery. We possess arcane knowledge and we can still access it if we try, through ancient, traditional methods; and in so doing we can meet the challenges of the future. There is a spiritual, ancestral power which has been preserved and transported over the ages and though it exists in esoteric form—mostly written upon the stars of our subconscious, we can retrieve and utilize it, with proper guidance and patient determination. It is not just karma (of our misdeeds) that is carried with us from incarnation to incarnation; it is also the grand Soul’s wisdom, in which we all share, that finds access in and through us.