I’ve been actually waiting for an opportunity to revisit the Taurus 4° oracle of April 23, The Pot Of Gold At The End of The Rainbow as the symbol sort of set me off on a negative spin. And today feels like that opportunity with Taurus 13° A Porter Carrying Heavy Baggage. So go take a look see at the April 23 entry entitled Roy G. Biv to which I’ve added an italicized postscript that more fully explores the positive significance of that oracle. Life being paradoxical, that oracle was distinguished in my blog as being a real thorn in my side, which stuck this whole time, until I came to accept and realize how not “trite” but truly transcendent and powerful that symbol is, probably more than any upon which I’ve yet mused. But first let’s look at today’s 13° Taurus symbol which triggered my need to go back 9°, to Taurus 4°:

Yesterday, we saw a man and woman window shopping. The female polarity of that image symbolizes our ability to look inward, whist the male is the objective, outward energy, taken together. Heavy baggage is never good, whether it’s an image of servitude, debt or emotional weight. I’m guessing here that it’s all a combo platter. Maybe the man yesterday went on a spending spree after we last saw him “just looking,” or maybe he remained with his nose pressed against the glass unable to purchase anything. Either way we are being made aware, again, of the haves and the have nots. The porter isn’t carrying his own baggage after all, he is burdened by the weight of inequity, something the sign of Libra, which governs this oracle in a twelve-fold sequence, knows a little bit about and doesn’t much appreciate. Libra, with its motto, We are seeks harmony and union and balance and order and equality, especially on the social level, air signs pointing to the mental and social experience. The porter, in his position, can be the personification of the perception of lack if not dearth itself. Then again, he might be happily in service, filling a societal need, doing whatever is necessary to gain a financial or societal foothold. 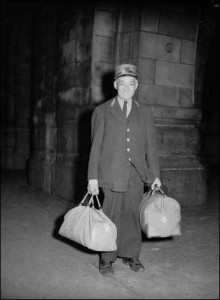 I think of films of the 1920s and 30s. Some put upon bug-eyed porter double-taking to the camera, commentating on the comings and goings of the privileged, exposing the villain, playing pal to the hero. He is something of a reality check and the conscience of the drama, pointing to the excess and absurdity that surrounds him. One cannot discount the most famous porter scene of all, from Macbeth. It immediately follows Duncan’s murder and provides comic relief while it allows the actor playing Macbeth time to wash the blood from his hands. The porter, along with all the residents of the castle has been on a drunk into the wee hours of the morning. He is roused by a knocking at the gate. In self-amusement, he pretends he is the gatekeeper to Hell, which has some truth in it given the bloody activities that have been transpiring. A connection is being drawn between Inverness and The Inferno of Dante. The porter hears what is MacDuff now repeatedly knocking at the gate and plays a little concocted scene in is mind whereby he, as hell’s gatekeeper, muses on what brand of sinner he might be letting into his make-believe abyss. One such character he imagines might have come a-knocking is an equivocator or con-man. The porter playacts:

Knock, knock! Who’s there, in th’ other devil’s name? Faith, here’s an equivocator that could swear in both the scales against either scale, who committed treason enough for God’s sake, yet could not equivocate to heaven. O, come in, equivocator.

The mention of the scales is not lost on me given Libra’s assignation over this oracle. The con-man can lie under oath, in court, but he cannot lie to God in heaven, so he is bid welcome to perdition, with a chuckle. The porter in our oracle might likewise be providing us comic relief, reciting a similar monologue in his head about those whose heavy bags he’s carrying. Not only might it be easier for a camel to be thread through a needle than it is for the rich wo/man to gain entrance to heaven: being rich and more subject to greed might actually put you on a fast-track to hell. And that porter may prefer to show others the way, carting their karmic Vuitton, than to be ushered in that direction himself. There but for the grace…he might be learning a great deal about the haves, enough to know he’s happy not to be one of them. He may have humble needs which are more than fulfilled by his salary and tips. The baggage isn’t his own. He can leave it at the station whilst others must continue arranging to have it hauled about. They certainly can’t take it with them on their ultimate destination which might very well be damnation.

Those who cannot carry their own heavy weight might well have too much. And yet, as we see in Macbeth, enough isn’t enough for some people. There are those who despite their lush lot in life still plot and scheme to eliminate others in their path toward some expanded worldly dominion, only to find themselves on a runaway train, hastening their own demise. This is the opposite of the illuminated rainbow path with its blessed weighty residuals, having been sent ahead, waiting on the other side.