On Another Time Around The Wheel 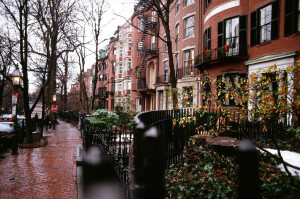 To view the original Sabian Symbol themed 2015 Blague corresponding to this day: Flashback…

Here we go! I’m in Boston where I went to school. At B.U. I lived in Warren Towers, very on the nose, on Commonwealth Avenue the first year and somehow ended up on the 18th (top) floor of the A tower (there are A, B, and C) which is the most easterly tower…and because boys got preferential treatment, on the east side of that tower, which meant I had a view looking into the City. The sunrises were brutal but the rest was okay. I was on the “performing arts” floor for some reason (spooky) as I didn’t request it having already veered away from my drama-club high-school self, but there I was. Karen Kohlhaas, still a friend, who became a great teacher and director, was on my floor and we had fun then, and more fun in more recent years, togther. She left for NYU after freshman year.

I moved, for sophomore year to South Campus and lived in the Earth House which was filled with a combination of geology students, environmentalists, pseudo-activists (playing out a college fantasy that no longer existed in the eighties) and stoners, basically, Dead Heads, specifically. I was on my own trip. I had a single which I painted a sort of cocoa with brown trim. It was maybe seven by eleven feet in dimension. I tried to make it look cozy, first semester; then I deconstructed in second semester, hanging my box spring on the wall, sleeping low, just on the mattress, hanging all sorts of objects, and making stacked file cabinets out of milkcrates onto wich I fashioned “doors” with masses of duct tape, from cafeteria trays, which also served to hold families of objects—a toiletries tray, a stationers tray, a weed tray for rolling joints. I wore sailor pants and sweaters onto which i fashioned pins—my favorite sweater had been inherited from an older child of my parents older friends, Bobby, who was in the FBI or CIA, even, by then, some fifteen years my senior maybe, and the claim to fame of the sweater, beyond the fact that it was a rather fitted 1960s black sweater with thin gold stripes, like that of a subtly modish bumble bee, with ribbed mock turtleneck, was that it had gone to the Filmore East on Bobby to see The Doors. It had magic in it. As did everything I wore, owned or touched which was getting more and more minimal in this deconstructive process of mine. I still have this sort of minimalist morphing that that happens in my life, from time to time, being very much the opposite of a materialist (and an air sign) I need a well appointed space of few objects. It’s what we now refer to around here as “feeling atonal.” Ha!

I also took to running everywhere. I didn’t walk to class, I ran. When friends took the T to Allston or into Back Bay, I would run along the sidewalk and try to keep pace, grateful for its frequent stops, though, I remember. Now I’m writing this first day of the new astrological year from one of my favorite places on the map, a hotel that has become home away from home, and the vib here is ever so so good. I typically listen to KCRW Eclectic 24 online and throw it to my bluetooth speaker I travel with. There is something to be said about living in the modern age. Except the news today is about an automatic car killing a woman. Is this the first robot murder? Will it one day be traced back to this?

Had a wonderful meeting with a writer for the Boston Globe who, it turns out, grew up in the next town over from where I spent summers all my life. If you’re a reader of this Blague then you’ll know that I have often mused on the town of Spring Lake, New Jersey and what it meant to me…yeah, spiritually. It was the place to which I was infinitely drawn growing up, the giant gilded-age mansions that were made of wood. My new friend, the journalist, spoke of climbing up the outdoor stairs of a mansion to smoke a cigarette and look at the ocean when she was fifteen. I got it. In those empty, badland days of seventies anonymity, with these vacant monuments to the past, many of them, looming over you every day, you could, yes, just walk, not sneak (nobody watching) up some escalier to do just that. These places were inhabitied ofen, only, by Irish lace curtains and musty, dusty, a lot of velvet, furniture.

This new year is going to be pretty wild, I predict, for all of us. I will try to keep my sense of humor and it is my belief that the universe, said, cosmos, has the ultimate one.