I pretty much decided that whatever the oracle was for today that I would allow it to trigger some pressing thoughts. Interestingly, the Sabian Symbol for today, at 23° Cancer, is The Meeting Of A Literary Society, the objective of which is a critical approach to common factors in our culture and to its psychological problems. Bingo. Just the sort of stuff I’m inspired to tackle. And, as a quick aside, in the application of a twelve-fold sequence, this degree would be ruled by the sign of Leo and the fifth astrological house, that of authority, especially as it is akin to authorship.

Historically, it has been the literary set that has been sensitive and given voice to the dynamics and interplay within society. Poets, essayists, novelists and critics together form a special body, holding up a mirror that reflects, often self-consciously, what we are on about as a collective. In so doing, they take a hand in shaping society as it evolves forward—the fifth house is one of creation, specifically co-creation with god (which this humble writer will assert is the only kind there is). As I’m doing here, the purpose is to outline the significance of what is, and thus to imagine what could be from this point. The literary are, as Rudhyar points out, “barometers and thermostats, reflectors and projectors of as yet unconscious images.” Today’s degree points to our ability to intellectualize, which is a process of combining our social objectivity and our emotional longing for something better. One of the main king-archetypes of Leo is Arthur (author) who tried to build his ideal world (Camelot) via the rather democratic means of the round table. Well, mostly that round table has survived in regards to a literary set, has it not? One thinks of early twentieth-century writers at New York City’s Algonquin. 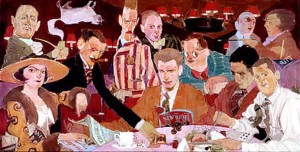 In yesterday’s image, that sailboat of wishcraft coming in over calm seas, we used the “feminine” (a Moon-ruled Cancerian image) energy to attract to us that to which we aspired; today we use the “masculine” (Sun-ruled Leo image) to establish a creative center to review and reimagine. I will now take my leave of you and spend the day in writing meditation on that score to relieve the pressure I’m feeling, close at hand, from the societal ills as it relates to interplay with others who need schooling in compassion.

No Man Is One