At Virgo 19° we find ourselves in A Swimming Race and, being ruled by Aries in a twelve-fold sequence, it suits that sign’s essential energy of objectivity and goal orientation. Competition is a basic element of survival, the first basic impluse at birth, and Aries and the first astrological house expresses this initial energy. Right out of the box, would-be life begins with a swimming race, that of millions of sperm racing toward the ovum. Mars, namesake of the ubermasculine war god (Greek: Ares), rules Aries, and it’s symbol is that which has become the symbol of malehood, the circle with the arrow, which you’ve seen on the doors of countless mensrooms. It recalls the male genatalia, an arrow emerging from a circle—I needn’t get more specific. And yet this oracle isn’t really about competition. It’s about “the stimulation that comes from a group efford toward a spiritual goal. Those sperm aren’t racing against each other but rather collectively, forgiving the pun, egging each other on—the goal is for anyone of them to win via all the rest of them providing as much impetus, all together.

I remmeber my first acting class. There was a German girl who performed a great “object exercise” resulting in kudos from our teacher and sangfroid from most of the students. But I found it inspiring. It just made succeeding, acing the exercise, seem all the more possible, and I went home that week and prepared and prepared and next week I was the student to beat. Only I wasn’t. I was the student to emulate. That’s the difference. The race isn’t for the individual to win. The race is to stimulate all the participants to do their level best. It may be a jungle out there at times but it need never be a rat race. It’s so important to remember that in the two dimensional world of social media seemingly designed to make you feel “less than” just the way the overly competitive people of the world will do. It’s a sickness and those who fall prey to it aren’t happy. Because they are so intent on winning and worship that they cut themselves off from the stimulation and emulation that the thrill of the race is meant to impart. Poor suckers. Without really knowing that this was my criteria for elimination, it has been on this basis that I have removed certain individuals from my life. I find people who compete cheat. Those of us who enjoy being in the game all together, regardless of who wins, understands that we all win. 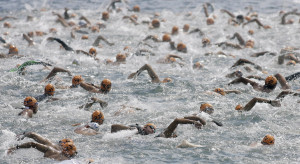 The important thing is to be in the swim. And it’s important to remember that water symbolizes both emotion and a certain spirituality, the former being the gateway to the later. As swimmers we effectively exist in another element, another realm, with its own rules, freedoms and limitations. Water is Source; so the symbolism of swimming signals a return to It. Just like those littlest swimmers racing toward that egg, on the spiritual level, we do not swim (seek) the source alone. And back being forward, alpha-omega style, we will all evolve along such mutations as originally surface in one individual. Evolution is rebirth, in a sense, such that each mutation, each generation, is one step closer to It. To seek to win, like those poor suckers whom we are ironically leaving in the dust, is to spiritually fail. At the ego level, there is no such thing as healthy competition. What is more unspiritual than keeping up with the Jones, let alone those Kardashians. These are not races that we or they can win. Neither can the Trump-ed up character. But if we let-go-my-ego (sorry these puns keep slipping out, spontaneously) and feel the inspiration and emulation coming from our fellow seekers, we are not just individual winners, together we are winged Victory herself.