Out With The Old

I’m purposefully keeping these entries short and sweet as I am currently writing a new show STARRING which we will perform on the Solstice at Joe’s Pub at the Public Theater in June. Picking up from yesterday’s inner battle between ego and Self, which saw me address some unresolved issues, today’s oracle at Taurus 18° is A Woman Airing An Old Bag Through The Open Window Of Her Room which is an image of purification. And this seems to follow. Because I for one feel very purged a result of holding forth to some folks I felt had acted unkindly. Spring cleaning of the emotional sort. I recommend it. Cleansing the doors of perception. Setting the record straight. Clearing the way for goodness. Life really is to short to suffer fools and to associate oneself with people, places and things that have low or bad energy. That’s all this old bag has to say today.

When we were writing Sextrology back in the day I went through a “metaphysical visitation” period whereby I was awakened every morning at 3:33 AM. And before this surfaced as a theme in the Nicholas Cage film vehicle Adaptation, being awoken at this time was an experience I owned. I came to realize that 3+3+3 signaled the nine Muses, the triple goddess in triplicate. I automatically see an upward spiral.

Of course the three is also the trident on it’s side, so little wonder that this Sabian symbol is ruled by the sign of PIsces whose ruler Neptune’s symbol is that trident. 48 reduces to 12 which reduces to 3. So it get’s better 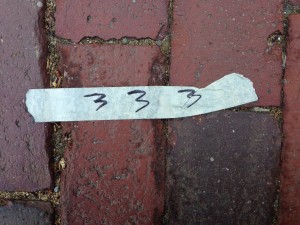 When I started the Afterglow Festival I did so under the name 333; but not automatically. There already was a 333 business on the South Shore of Massachusetts. Some kind of management company. They were not easy to reach—I had to put on my Corleone thinking cap—I have always loved the fact that Lynne’s name is Corbett and mine is Leone so together we are Corleone—lion heart—although the Cor in Corbett is actually Gaelic for raven which is the sigil of their house. Mine of course is Bert Lahr.

So I finally tracked these people down and convinced them, can you imagine, to write me a letter “letting” me also be 333, Inc in Massachusetts. Afterglow is a d/b/a/ off of that. I figured I’d need to court these Muses in the making of the festival and surely I need invoke them moving forward with new artistic goals.

The first year of the festival we put it on at The Provincetown Theater which was lovely in its way. We comped a great many people. But when I tallied the total of actual tickets sold over the four days it came to, yes you guessed it, folks, 333.

You have to believe we are magic. LIfe is all just one big upward stroll through the Guggenheim.