If yesterday’s cosmic energy was hinged on recognizing ourselves as being able to receive a certain revelation, and also to embody that revelation, as a result of a happy disconnect with traditions and tribes that no longer resonate with us, today is about living in the present in a matter suited to the future which you glimpsed in that revelation. Today’s Sabian Symbol for Taurus 8° A Sleigh On Land Uncovered By Snow suggests that the revelation, or indeed the reveal-ation, happens over time. Not to say that we mightn’t find ourselves to be something of a fish out of water, which is another aspect of this image. But that’s what comes from taking ones pioneering spirit and fixing it firmly. For a time it remains hidden, then it is revealed but unsuited to it’s environment but as the saying goes: Winter is coming. It always is. Thus today we consider, as Rudyhar puts it, the value of anticipating and preparing for expectable conditions. Of course your idea of what expectable conditions are differ from mine. We might see expectable conditions in an astrological chart which you may think is hooey; you might think some other Jesus is coming and first thing on his to-do list is to punish all the queer people. Everyone has been handed a different playbook of revelations. As well they should be.

I believe the snow symbolizes the purity of our own vision. In the wake of that we hope to have revealed a vehicle that can travel through the landscape of that vision. The paradox is that our vehicle cannot travel without the stuff of that vision. Which is right. We must reimagine our future, now, based upon the vehicle we’ve engineered from the original vision. A new version of vision must come to bear before we can move through our future experience. We got a glimpse at first of where things for us our going, we made a plan, now we must put both elements together to work that plan which will require revision. This will likely effect the nature or design of the vehicle, back and forth ad infinitum. Tweaking plan then vision will be a constant—our mistake will be to get stuck in the wholesale necessity for either to be fixed. But right now they are. This image emblemizes the idea that we should know where we’re going but be in no rush to get there because, timing being everything, we have to wait for the right climate and conditions. But we’re ready, regardless of who sees us as a fish out of water. The Jesus Fish was out of water for quite a long time—cue lions eating Christians—but slowly the environment caught up to those who were already living that future vision, at great sacrifice, to be sure. 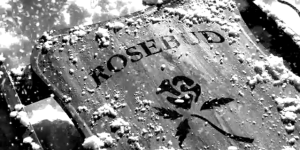 Ah that’s the rub. How much are you willing to sacrifice? And, further, how patient can you be. In a twelve-fold sequence of signs rolling through these 360 symbols, today would be characterized as a double-Taurus image. We know, from our Taurean friends, the power of patience and persistence in their fixation on their own talents, if not visions. The sleigh is like a rosebud, waiting for the right conditions to bust forth, Orson Welles being a Taurus not withstanding. This sign—look around you at all the the buds and flowers preparing the way to bear fruit—is very much about latent or dormant potential. But it isn’t vague or undiscovered, it is already consciously known and accepted and being prepared for some kind of roll out. The potential of Citizen Kane, his path unfolding, his vision of the future, was already fully scripted in his experience as a young boy, synonymous with his sled. He glimpsed the future then, though he had to wait for it to unfold. And, in his case, it was as thorny as it was beautiful; likely because his vision involved some form of retribution. And his vehicle was designed to ride rough shod. His original revelation may have been as pure as the driven snow, but the means via which he sought to realize it colored that vision as he journeyed forth, vehicle and vision, vehicle and vision, informing and reforming one and other, over the hills of time.