A Flag Is Seen Turning Into An Eagle at Aquarius 9°. The first thing that comes to mind is the myth of Ganymede, an Aquarian archetype, the male cup bearer to the gods. He was raped by Zeus who took his totem form of Eagle, swooping down to pick up this beauiful boy then installing him on Olympus, replacing his own daughter, Hebe, in the job of cup bearer. This sign is ruled by Sagittarius in a twelve-fold sequence and it is quite similar to the symbol at 12° Sagittarius, where a chanticleer also turned into an eagle. Unlike the crowing cock, the flag is an inanimate symbol, and its transformation into an eagle expresses the vitalization of a symbol into a power to be reckoned with. After the previous symbol of wax figures, we have moved beyond the representation of new archetypes to merely inspire us; now the symbol takes life and flight. I don’t know about you but I’m just about ready for this sort of thing to happen. 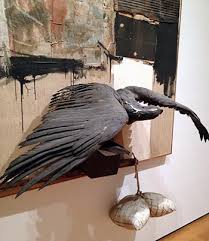 Robert Rauschenberg’s “Canyon” is a reinterpretation of Rembrandt’s “Rape of Ganymede, the pillow being a buttocks, which is that canyon

Aquarius is the sign of the freak flag and letting it fly. We all have a symbol standard to wave, some auspice under which we are an expression of new order. Freedom and expansion are keynotes of Sagittarius, too. Indeed no two signs in the zodiac are so outré, and the main archetype of Sadge is Jupiter/Zeus himself. Perhaps the myth of Ganymede is about embracing a bit of Aquarian diversity in oneself—the sign rules same sex along with all other so-called deviations from and mutations on the norm. It feels like more than a coincidence that the rainbow flag is an emblem here when Iris, goddess of the rainbow, is one of the sign’s key female archetypes as well. As a rule, the Aquarian male includes many a fit and lucious lad, many gymnasts and swimmers being born under the sign. The replacement of Hebe by Ganymede also expresses a changing of the guard, a new era, and perhaps one with a little shock value. What we stand for (the flag) spreads its wings and soars to new heights, elevating our own consciousness and that of those around us. We not only have a new standard of value, we are acting on it. “The seer becomes the doer,” says Dane Rudhyar, Sabian specialist, who tages this symbol “Acting Out.” If only he knew the multiple entendres that now carries.

The Once And Future