At Capricorn 28° we encounter A Large Aviary, a symbol that would be ruled by Capricorn, as well, in a twelve-fold sequence. Birds symbolize spiritual forces and the aviary represents these entities occupying minds (like ours?) open to psychic realities.

Although it is a valuable tool, you have often heard me caution against the world of social media and the cult of worship interbred by an outside need to show-off and attract attention. Well, I also believe that overindulgence in that arena might also dim the lights in said aviary, if you get my meaning. Should I be seeking to further open my mind to a collective of psychic forces and entities, then i can’t overly numb it with any external influences. I have dubbed 2016 the year of ascension, and it’s only right that the New Year begins with the sign of Capricorn whose cardinal-earth energy is that of the ultimate climb, ascension; never mind the fact that resolution, imposing a new structuring rule of self-containment also speaks to the energy of this Saturn-ruled sign. 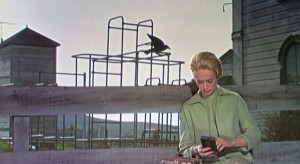 The arduous ascent of the previous symbol has brought the revelation of spirits presenting themselves to the widening gyre of our brains. We are not only seeking synergy with cosmic energy, but some mastery over them. What this symbol is driving at is a sort of clairaudience, which is a transmission from entities in the spirit realm which happens through the hearing of sounds, voices, even music. Personally, this is not my form of reception, except for some very few occasions. The music thing, though, I get that a lot. Now, the fact that some reading this will think I’m crazy is the other (shadow) side of this oracle: We might not have mastery over these influcences but be subjected to them which, as people who experience this, is no fun.

Spirituality aside, if we look at this symbol as representing the achievement, not of revelation, but of certain success: even then we find we would have a lot of voices in our head, from all the entourage and managers and agents and fandom. And, as in the sense of spiritual ascension, we might achieve certain peak experiences and then plateau at a tender age, unprepared for all those sublte energies circling around us like so many birds. And, faster than you can say, Tippi Hendren (a Capricorn) we find our brains are being pecked uncontrollably. And instead of clarity, let alone clairvoyance, we are bombarded with confusion.