The Library Is Open

Today we discover Guests Are Reading In The Library Of A Luxurious Home which is the kind of image that automatically makes me happy. At Cancer 26° we are seeing the “transerence of social privilege to the level of intellectual enjoyment”; which is a wonderful thing to do with the grace of such privilege. We recently watched an old Greer Garson film, Mrs. Parkington, which is amazing on many levels. The writing is fantastic. And the theme hits you right in that yankee spot in the center of your being–even if you’re not an American you probably know what I’m talking about. In it the self-made individual is to be celebrated, while the lazy inheritor is a lout. In my experience, of the big silver screen, I find this largely to be true.

What better way to celebrate your wealth than in the exercise and development of your mind. I suppose, if ever I was jealous of peers who grew up with a trust fund, it was because of the grace of time and space it could afford to focus, with fewer obstacles, on what was most important in life. Surely, I would have stayed in school as long as possible instead of slinging hash to make ends meet; and I would have used all that free time, as a younger person certainly, to devote to my first and greatest love: the Theatre. I am very fortunate that I’ve managed, coming from very humble beginnings, to carve out a life where I work for myself, living by my wits, and, well, as you can see I, or in case you didn’t know, I do spend a lot of time exploring ideas and notions that expand my conscious mind—not to mention underaking certain endeavors that give other parts of my brain a bit of a psychic workout; and I’m never very far from at least producing for some stage or other.

I am perfectly aware of the paradox: because I’ve had to make my own way—Major and Mrs. Parkington would have liked that—I can say that I would have used my time to devote to my callings would I have been bankrolled; but really, if funded as such, I might have been the biggest slacker on the planet, going, as Joni put it, from cafe to cabaret. Ah but that was a song about freedom. And David Geffen. I’d like to meet David Geffen. I’m friends with him on Facebook and I think he’d dig what I am trying to do in the arts, but I’ve gotten off the subject. If you see David just tell him to call me. He seems to be someone who might have sunk a bunch of dough into creating a fabulous personal library where his guests could hang out and just read. I read two chapters of two different books last week. That’s the last time I had a moment to read. Well, I suppose I could make time, but this time of year is so much about doing the next most pressing thing. In precisely eight weeks, my labor of love, the Afterglow Festival, will take to the stage in Provincetown. It’s a lot of work, which I don’t mind doing. So long as people like and support it, which can be an uphill battle. I often wonder why it is that, I of the no trust fund and minimal material trapping, spend so much time not making money. I think the answer is that it seemed like an if-then equation. If I have money, then I’ll do what I want. If I have money, I’ll live by the sea. If I have money, I’ll travel. If I have money, I’ll buy art. Well, I think I’m the sort who goes directly for the then. I would build the library first. I do have a butt load of books. I just need to read more of them. 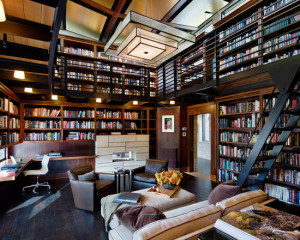 This oracle would be ruled by Scorpio in a twelve-fold sequence, the sign ruled by Pluto whom we know as the god of the underworld but whose name has worked its way into the English language based on his dual role as the god of riches. Plutocracy is rule by the wealthy and so, once again, these randomly derived oracles seem to fall right into light with the endless loop of the Zodiac signs correlating rather seamlessly. Dane Rudhyar, the real expert of these Sabian Symbols, feels it important to stress that this image is not about the leaders of the intellectual world. We are dealing with the rich, if not the idle variety, who are only reading out of obligation to keep up with social and cultural trends as just one of the many ways they strive to keep up with the Joneses. The Joneses and the Parkingtons never did mix.

Bolt From The Blue