This is the Dawning

After the return to the body and the powerful wisdom of the organism that is us, we are immediately shifting into the soaring manifestation of our noblest ideals. Really? Already? That’s all I get? One day of shutting my mind off, aided by watching paint dry I mean “The Wiz”. And now, at Sagittarius 12° A Flag Turns Into An Eagle; The Eagle Into A Chanticleer Saluting The Dawn. The Flag, and symbol Eagle, are surely pointing at America whose most noblest characteristics establish it as a cradle of new civilization if not New Age spiritualism. I have to point to yet another polarizing, but skeptically I imagine fleeting, conversation on gun control. The 2nd ammendment was in response to the British banning dissenting colonists from having muskets; it was not intended to insure that paranoid, right-week, extremist nutjob American terrorists could own AK47s so we need to shut that shit down once and for all and repeal the 2nd ammendment. That is my bid for soaring manifestation of noblest ideals.

In addition to being the symbol of America, the eagle is the totem of Zeus, Jupiter, the name sake of the ruling planet of Sagittarius. Just as the archer can hit a target he can barely see, the eagle can soar so high that it is the first to glimpse the dawn. This is why, in this image, he turns into the chanticleer which is just a fancy name for a crowing rooster. In the fable of the Chanticleer, the rooster thought he wasn’t just heralding the dawn but that his crowing brought it about. That’s interesting. Are we, in our noblest visions, mere heralds of the dawning of the new age—note that yesterday I cited Eos, goddess of the dawn as an Aquarian archetype—or are we the creators of it by virtue of our vision? It’s a rhetorical question; don’t expect me ot have all the answers. I can say this: that there is still an a combined ideological-emotional place in my psyche where I can isolate a vision of America as the great hope for humanity akin to what those founding Aquarians Washington and Jefferson, especially had in mind (we will let alone the theory that Jefferson was visited upon and helped by an alchemist, perhaps Saint Germain, which explains the drafting of The Declaration of Independence in a matter of days if not mere hours). There is still that noblest spark of highest principle not to be confused with the forced patriotism that Bush and Cheney and Rumsfeld and that true axis of evil concocted to enter us into a war of profiteering and the eroding of American civil liberties. Those devils are cunning. But they are no match for the angels. 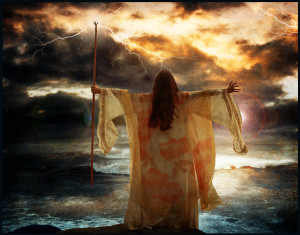 In a way, today’s oracle, ruled by Pisces in a twelve-fold sequence, is about certain “annunciation”; now that just means announcement, something the dawn and the rooster make daily. But the famous annunciation, of course, is that of the angel Gabriel coming unto Mary to announce her conception of the christ child. Again, we have to wonder, if Gabriel wasn’t the agent of the pregancy, not just the herald. Blasphemy I know. But we are speaking metaphorically here. Even the word herald means both messanger but also foregoer. I think we are both creatures and creators of new dawns and the paradox inherent in this oracle is to be milked for all its worth. Sure you can keep sharing your thoughts on social media or you can actually be the change, the dawn. It’s not enough to wish that the gun laws were changed, you have to change them or else you continue to suffer the consequences. We cannot have foresaw the damage the 2nd ammendment would bring two hundred and forty years ago. But we have to accept the reality of what we are living now and we have to be willing to break with the past—it’s not tradition it’s trauma—and live in a new world with new rules for new hope and happiness.