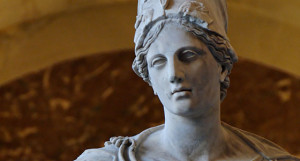 As I mentioned, Spring Equinox is like New Year’s Day and Easter rolled into one for us. All Christian holidays have been pinned to already existing pagan ones. Thus the tradition meal of lamb, a baby sheep or ram, on Easter, a word that derives from the festival of the goddess Ishtar, a fertility deity, whose fecund symbols included bunnies and eggs. She is the cognate of the Sumerian goddess as Innana, later Astarte, who is somewhat synonymous with Aphrodite or Venus—Ishtar is the personification of that lovely planet. In our vernacular, Venus/Aphrodite/Mari (synonymous with Mary in biblical mythology) is the archetype of Pisces, associated with the sea, a goddess of love, while the sign of Aries, ruled by planet Mars, named for the war god (Greek: Ares) boasts the war goddess, Athena, as its female archetype. Ishtar/Innana, though, was goddess of both love and war which were perhaps more delineated into the characters of Aphrodite and Athena in the Greek pantheon. I always wondered why it is Athena, Aphrodite, along with Hera (Juno), form this triple threat to Paris, prince of Troy, who must choose the most beautiful among them. We are used to viewing goddesses in triplicate nature, all emanations of the One goddess. So perhaps the Judgement of Paris was really about what was most valued in human experience: Wisdom (Athena), Power (Hera), or Love (Aphrodite)—he picked love which led to the most famous war of all time.

Love and war are inextricably linked. The War god Mars is lovers with Aphrodite, giving birth to Eros/Cupid who embodied the combination of both elements. Eros is forever a babe, and yet he is also the oldest god. Love is War and they combine to the most essential and evernew. Eros is love. Jesus is love. Aphrodite/Mari/Mary being their eternal mother. Jesus is the babe and the everlasting god—part of the triplicate of father, son and holy what?: originally that trinity included mother. But we fear the feminine, the vagina dentata that threatens to castrate the patriarchy. It was from Uranus’ castrated (by his son Cronos) penis that Aphrodite sprang, the foam, of the sea. In French the word écume means both foam and scum, the perfect Pisces paradox once more expressed. But yes I realize we are in the sign of Aries. And thus I turn my attention to the goddess Athena, the aspect of female-hood as seen through the ultra masculine lens of the Zodiac’s first sign, ruled by Mars, the god of war. And so she too wears armor. And we have no evidence of her ever having a lover. Her war-like brother-archetype Mars is the lover of Aphrodite who is married to the lame Hephaestus who does attempt to rape Athena, but his seed spills on the ground impregnating the Earth goddess (and his great grandmother) Gaia. A son is born of this union which Athena raises as her own.

I don’t know why I’m telling you all this. Except to hit home the self sufficiency of the Athenian archetype. And to perhaps illustrate the fact that she couldn’t have it both ways. She couldn’t be some god’s wife—she did take a passing fancy for a mortal friend of her demigod brother Heracles/Hercules. But, unlike her warlike sibling Mars who rushes into battle and ere long rushes out again, bawling if he sustains the slightest scratch: Athena has never lost a battle. She is strategic, defensive and she uses her godhead of wisdom and wit to, well, outwit all other opponents. One might assume that her surpassing success, not just in war, but in art—she is goddess of craftsman and, by extension, civilization—is a direct result of never being anybody’s wifey or main squeeze. She is the premier goddess archetype in the Zodiac, and a feminist; which means that feminism is encoded right up top into the Zodiac. The dual archetype of Aries is expressed, un-ironically, in the uber male and macho and rather bullying and cowardly figure of the main man Mars/Ares; and to counterbalance this energy, we don’t do so with an uber-feminine figure—the sign of Aries, under Mars rule, expresses the energetically “male principle”—but we do counter balance with an ultra feminist figure. It begs the question: what is the true opposite of this uber male energy embodied by Mars? Well, there are two opposites at least: there is the ultra feminine Aphrodite, Venus, her namesake planet representing the feminine principle, expressed, in various forms, in the signs of Taurus and Libra, while the archetype of the goddess herself rules over the uber feminine sign of Pisces. That would be one archetypal opposite to the god Mars; but so to is Athena, despite the fact that she is similarly clad in wargarb and helmet likewise brandishing a spear because she takes the pure aggression of the male principle and harnasses it into a strong defense and energy of protection and patronage. Athens is named for her because she took the most care for its civilization. Athena is arguably the most eternally modernist deity in the pantheon, male or female; although Apollo might give her a run for her money. Apollo is an archetype of Aries opposite sign of Libra, a male figure, in a masculine sign, ruled by feminine Venus. Whereas she takes on the estate of war and traditionally male domains, Apollo is god of art and music and prophesy and all things that had, in pre-Hellenic civilizations, been the estate of female goddesses and muses.

Once You Get Started